The European Union (EU) Ambassador to The Gambia, H.E. Attila Lajos on Wednesday 16th March 2016 visited the EU funded project titled ‘Promoting Women’s Socio-economic Rights in Central River Region being implemented by ActionAid International The Gambia. The visit was part of a three-day countrywide tour by the Ambassador to visit EU funded projects in The Gambia. The project started in 2013 and aims to contribute to gender equity in The Gambia, through the promotion of women’s access to socio-economic rights and economic empowerment by addressing factors hindering women in The Gambia from accessing and controlling economic resources.

On his arrival in Kumbaney village in the Central River Region, Ambassador Lajos and delegation received a tumultuous welcome with a display of welcome messages from the beneficiaries. Here, he visited the women’ vegetable garden being supported under the project. “Before the project started we used to go to the bush to mine incense but when the project came it eased our burden.The consumption of our garden produce has improved our nutritional status and health condition as well as our income level” said Boto Camara, the President of Women’s Vegetable Garden.

Speaking briefly to the women after a conducted tour of the garden, the ambassador told the women, “what I have seen so far in all the communities and the projects is an extremely impressive experience. I saw community initiatives supported by local government authorities, NGOs, civil society organizations and with financial support from the European Union. The fact that all the beneficiaries of the projects – the ordinary people in different communities have changes in their lives, any project that brings changes and improvement in the lives of the people, is a successful project” said the Ambassador. According to him, International Women’s Day should be celebrated every day of the year, not only on the 8th of March every year. He thanked ActionAid and partners, and the local government authorities for supporting the project and noted that the changes we are yearning for cannot happen soon but we have to have the stamina to carry on and make advancement in promoting women’s rights and empowering them. He told the women to consider him as their closest ally.

At a separate meeting with AAITG staff and partners at ActionAid’s office in Kudang, the Executive Director of AAITG Omar Badji, highlighted women’s economic empowerment as one of ActionAid’s strategic objectives to enable women participate effectively in the development processes.According to Mr. Badji, culturally, women in the Gambia are meant to listen to men who make decisions on their behalf and the women will just obey those decisions. “The issue of land is also very critical because most of the women around this area (CRR) are smallholder farmers but when it comes to land allocation and control, it is entirely under the control of men. The project has come to support and empower women for them to be able to be part of the decision making processes and to know what their rights are especially in terms of resources for production”, he concluded.

Amie Secka one of the beneficiaries of the project from Sinchu Alagie in CRR said that the project has taken them to another level in terms of development and awareness creation on their rights. According to Amie, they have learnt skills that have helped increase their income level.

Speaking on behalf of the Governor of CRR, the Deputy Governor Alhaji Malang Saibo Camara said that no government can bring development or do everything alone by itself. He therefore commended the project which is aimed at promoting women’s socio-economic rights. Camara further stated that empowering women will certainly eradicate poverty and this is demonstrated in his region’s decision to include women in the district tribunal. He reiterated the need for continuing the already existing partnership between the government, ActionAid and the EU, and thanked the Ambassador for the support accorded to ActionAid in the implementation of the project. 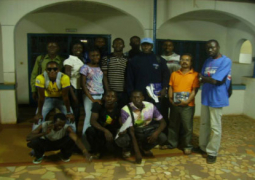