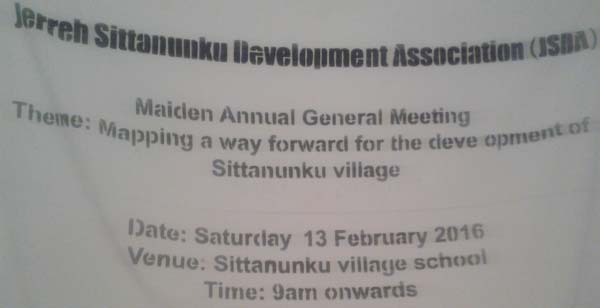 The annual gathering, held at the village school ground, was on the theme ‘Mapping a way forward for the development of Sittanunku village’.

JSDA Chairperson Sanusi Darboe, in his welcoming remarks, said holding the AGM is a constitutional requirement of the association.

He said since the formation of the association in January 2015, the executive has been working hard to put it on a sound footing by making sure that its existence is legally recogised by through registering it, putting in place a constitution, and opening a bank account for the association.

Also, members of the association have inaugurated a five-member board of advisers whose mandates include providing strategic advice and guidance to the association.

Mr Darboe said a Facebook page has been created as a means of communication from the executive to the general members and vice versa.Almost all the members of JSDA, in The Gambia and abroad, are on this page to keep in tune with developments of the association.

There are plans to create a website and a blog as a means of passing on information to the wider public.The association has a letterhead and a stamp for official correspondence, Mr Darboe explained.

The chairperson said since throughout 2015, the association has been holding regularly monthly meetings as well as regular monthly contribution.

Chairperson of JSDA advisory board, Dada Manneh, commended the executive and general membership for their dedication and commitment to the development of Sittanunku.

He also hailed the association for the 41 bags of cement donated towards the fencing of the village cemetery.

Other board members, Lamin Sillah and Ba Sainey Jammeh, took turn to advice the members on ways to foster unity and push forward the development agenda of the association.

“The membership of the association includes professionals in different areas; when these people put their heads and hearts together, they can achieve a lot for the association and the village at large,” he said.

However, Mr Jahateh said the main challenge of JSDA is meeting attendance.“The turnout of members for the monthly meetings has not been encouraging at all considering the number of Sittanunku youth in the Kombos,” he lamented in his 2015 activity report.

The treasurer Binta Jammeh also gave the financial standing of the association as of 31st December 2015.

Junkung Saidy of the National Centre for Civic Education told the gathering that such an association like JSDA should work hand in glove with the village development committee to complement each other’s effort in the advancement of the village.

As part of the AGM, Governor Lamin Queen Jammeh of North Bank Region, Nuha Marenah of Arab Gambian Islamic Bank and Dr Abdou Jammeh – all natives of Sittanunku – have been conferred honorary membership of JSDA.

These people were nominated and awarded based on their explicit support to the aims and objectives of the association couple with their outstanding contribution to the development of Sittanunku.

Honorary membership, according to the constitution of JSDA, is reserved for reputable individuals interested in the association but are not ordinarily qualified for full membership by virtue of their age.

The constitution of JSDA was also amended and adopted, in line with the recommendations of the advisory board.

As part of the amendments, the term of the executive has been reduced from three to two years and the chairperson of the association cannot serve for more than two terms.

Meanwhile, the AGM has given a full mandate to the interim executive after serving their one year formative period.

Now the 11-member executive committee will continue to steer the affairs of the JSDA for the next two years after which the association will go into congress.

However, the AGM was held low-key because one of the elders of the village passed away a day before the meeting.As a result, the planned fundraising shows that were to be staged a day before and on the actual day of the AGM were not held. 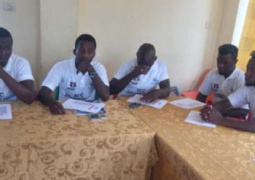 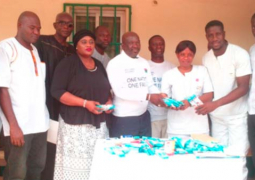