These reactions of Mr. Manjang came hot after some youths were mercilessly flocked alongside other corporal punishments in an open place during the last quarter-finals in Gunjur by soldiers from Kartong Military Barracks. Also, people were beaten for celebrating their goals in an open field that has no perimeter or fence between the pitch and the spectators.

According to Mr. Manjang, who walked into the Point office yesterday, it is very pathetic to see how soldiers mistreated the youths of Gunjur who came only to watch the game.

"This is a concern I really want to express and I want it to be highlighted very clearly. I am a real supporter of sport and also a great advocate for the youths, but what am witnessing or what is happening in Gunjur now is something that needs to be stopped immediately and am putting all blames squarely on the football committee. This has been going on, but the two big issues I want to raise here, is the incident that happened on 2nd day of Koriteh which was on 21st of September 2009, and the last incident on Sunday 27th. This is uncalled for. I felt touched as a youth seeing my fellow youths under such humiliation, disgraced and mistreatment. I see no amount of crime that they have committed, even if it is murder that will not warrant them to undergo such mistreatment," he stated.

As Manjang put it, "the sport committee in Gunjur (GYSDA) should act now with urgency to stop the soldiers from maltreating our youths at the field. It is because of this same youth, that's why you organise this competition. Therefore, they must be respected. These same youths are the very people you use in any fundraising venture you do in Gunjur so they must not be subjugated under torture and harassment. If they commit a crime arrest them and let the law take its cause than beating them like dogs. These can cause an alarm if there is no stop to it."

In the view of the youth advocator, the soldiers are only there to save and protect the place and to maintain peace in the course of the game, but not to harass or torture anybody.

"In my view, I think the soldiers are only there to save and protect the place and to maintain peace in the course of the game, but not to harass or torture anybody. "God said in the Quran "Walaqad qarrabna banni Adama" (Verily humanbeing is a dignified animal). So why must we treat our fellow humanbeings like dogs and donkeys? Some of these people are responsible men, treating them in that manner is going to cause a great deal of havoc in their lives as responsible peoples It could be even dangerous as the large crowd followed with little children falling on each other can cause serious injuries or even death. I am really concerned and so as many other people.

Several efforts were made to reach the executives, but they declined to make any comment. 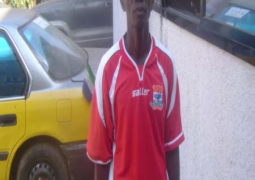