Jole Rider Foundation, a UK based charitable organisation recently donated 385 bicycles to eight schools in the country, meant to alleviate the transportation woes of pupils from far-flung communities.

Speaking at a presentation ceremony in Gunjur, the National Coordinator of the organisation, Fabkary Boyo Touray said Jole Rider would continue to support the education of children in this country.Touray stated that the presentation is unique in the sense that it is the second of its kind.

Mr. Touray disclosed that the organisation is making efforts to train young people in the communities on how to fix and repair bikes, which he noted, will also help improve their employment prospects.

Volunteers David and Juanna explained that the training is aimed at equipping young people with bicycle maintenance skills to ensure its sustainability.

Describing the students as “highly intelligent and hardworking,”he said they would constitute the staff of the organisation to ensure the sustainability of the bikes for two to three years, as well as training other people all over the country.

The chief of Kombo South, Mustapha Touray said over twelve thousand people have benefitted from the intervention of the organisation since its inception.

According to him, it’s a tremendous boost for education in the country.

“Education is everything in this world and in the hereafter. Even Allah said to the prophet that he should seek education to know him so that he could worship him. The priority of the government is education as the way forward for development.

The school management committees should make sure the bikes go to the needy people and that they are well maintained. Favoritism should be avoided in the distribution of the bikes so that the deserving people get them.” 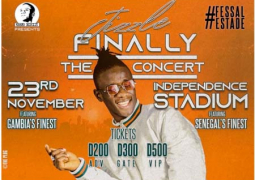