Lend a Hand Society recently delivered a handful of donations to Fajikunda Hospital and Edward Francis Small hospital, meant to ease the stress of their patients. The donated items included baby items, clothing, shoes and many others.

The group first visited Fajikunda Hospital where Aisha Keita, the Communications Officer, said Lend A Hand Society is a youth organisation, with the ultimate image of helping the young people actualise their dreams, potential and talents.

Aisha, who said they are here to support each other give back to the people, noted that even though they are working with partners, like the National Disaster Management Committee they feel like doing something for themselves.

For his part, Robert Sambou, the Nursing Officer at Fajikunda Hospital, said they would not be disappointed with them, as according to him, they are very much dedicated to their duties. “We are well-known for quality health care services,” he added.

The group then headed to the Edward Francis Small Hospital, where Fatou Ceesay Nyabally, the Chairperson of the donation committee of the hospital, said not everyone can give back to the people.She concluded by saying that those at Tanka Tanka would be very glad to receive the items. 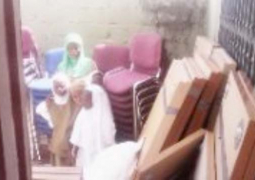