As Sambou Suso's Album Gets Launched

The Joint Officers' Mess in Kotu will come alive tonight as the Gambia's reigning diva descends there to launch her maiden album.

Sambou Suso, fondly referred to as Queen of Afro Manding, will tonight celebrate years of toiling and hard work by launching her first-ever album entitled My Baby.

The twelve-track album is being sponsored by the diva's Swedes manager, SSHFC, Gamcel and Africell.

Sambou Suso in an exclusive chat with Entertainment revealed that the album, which will be also in CD format, was recorded in with part of it recorded by Petawbi. The album, she stated, is now available at Kerewan Sounds and other record labels in the country.

Asked to her future plans, the Afro Manding Queen said she intends to produce more albums, adding that she had already set to work in coming up with another one to be dedicated to the Gambian leader.

"I'm over the moon to launch my album because the waiting was so long," she stated.

Meanwhile, events for the launch of My Baby will kick-start at until. 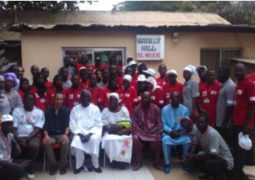