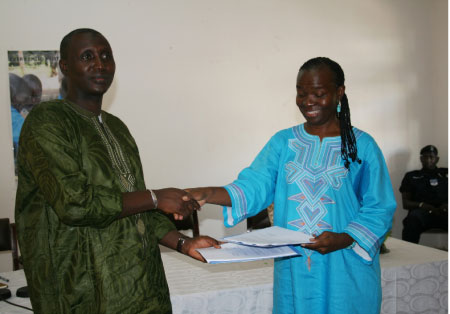 The United Nations World Food Program WFP recently signed a Development Program Action Plan (DPAP) with the Ministry of Basic and Secondary Education (MOBSE) at a ceremony held at the regional education directorate region one.

The document was signed by Baboucarr Bouy, permanent secretary MOBSE, on behalf of the minister and Ms Victoria Ginja the WFP country representative.

Speaking on the occasion, Solomon Owens, minister of Agriculture on behalf of the minister of Education, said the event demonstrated the unwavering resolve and commitment of both the government and WFP to successfully transit from an old school feeding program which largely depended on implementing partners such as WFP to procure and deliver the goods to the schools to one that will be totally funded, managed and monitored by the government.

It must be recognized, he added, that the former is currently characterized by unpredictable funding due mainly to competing demands, resulting in pipeline breaks and hence difficult to sustain, while the latter demonstrated the ability to promote the purchases and use of locally and domestically produced food, the outcome of which triggers development processes that benefit not only children, but the community as a whole.

Victoria Ginja, the WFP representative, said WFP has been providing assistance in the area of school feeding for the past 40 years.

According to her, the difference between then and now is that significant strides have been made towards establishing the foundation for a nationally-owned sustainable school feeding programme.

During the life of the project, WFP will share know-how and assist the government to identify the most appropriate way to establish and manage the home-grown school feeding programme.

Evidence has shown that schools feeding greatly enhanced the attainment of the education goals of the country, she added, by contributing to increased enrolment and completion rates, and this was backed by studies by WFP, World Bank and other partners.

“Children who benefit from school feeding programmes have been known to have improved cognitive capacities and performance in school,” she further stated.

According her, from 2012 to 2016, through a development project, WFP will continue its support to school feeding in The Gambia with a total of 102,131 beneficiaries, and will also focus on developing capacities to manage a national feeding programme.

The overall goal of this development project is to establish the foundation for a transition towards a nationally-owned and managed sustainable school feeding program within the current decade, while ensuring that the gains achieved regarding access to pre and primary education are consolidated and improved upon, especially in regions with significantly lower education statistics.

PS Baboucarr Bouy revealed that the WFP, the food aid arm of the UN, has been operating in the Gambia since 1970.

Assistance is being provided in the areas of education, food security and during disasters, both natural and man-made, he said.

In the area of education, the school feeding programme aimed at enhancing the resource base of the country by providing school meals to children attending early childhood development centers, lower/basic cycle schools and selected madrassas.

Bouy noted that this project responded to the government’s request for support in establishing, by 2016, a sustainable, nationally-owned school feeding programme.

Such a programme will be supported primarily through products purchased from local producers and consistent with the government’s efforts to guarantee basic education for all children with a view to eventual handover of the programme to the government, he announced.

New Year’s message from The Presiding Bishop of The Gambia, The Methodist Church The Gambia and Chairperson of The Gambia Christian Council, The Most Reverend Hannah Caroline Faal-Heim