Jesus in the Quran

The veneration and respect the God affords Jesus (a) in over ninety verses of the Quran may come as a surprise to many Christians. But this does not imply that the Quranic world-view accepts all the core beliefs of the Christian faith. As the author of this article points out, the Quran strongly objects to the Christian beliefs of Jesus’ divinity, his filial relationship with God, and the concept of Trinity since these beliefs oppose the Islamic insistence on God’s absolute transcendence. However, unlike its engagement with other faith groups, the Quranic response to the Christians is multifarious and this forms the main subject matter of this article. In it, the author attempts to categorize the Quran’s engagement with Christians regarding their beliefs. As the author shows instead of ignoring the issue completely or categorically condemning it, the Quran uses at least five different methods in its attempt to correct what it considers ‘deviant beliefs’. This in itself is a sign of God’s mercy and attentiveness to the Christian faith group.

The title “Jesus in the Quran” is perceived in different ways by Muslims and Christians. Setting aside the small group of Christian scholars who have paid a great deal of attention to Islamic issues and who have exerted substantial effort into understanding the true nature of Islam, most Christians may imagine that any work with a title such as “Jesus in the Quran must deal with a Quranic perspective on something outside the Islamic faith, since according to them, Muslims can consider themselves Muslim regardless of their belief about Jesus (a). But this is incorrect since believing in Jesus as a prophet is a fundamental part of the Islamic faith. All Muslim are required to believe in the divinely appointed prophets-including Adam (a), Noah (a) Abraham (a), Moses (a), Jesus (a) and culminating in Muhammad (s). For the Quran says in describing those who are righteous:

This an example of a more general issue that has become a major hurdle in the field of interreligious studies. To better understand this problem, let us turn our attention to other fields of knowledge. In these fields, authors usually do not need to pay a great deal of attention to the background of their reader; it is not an element which greatly influences the method and content of their discussion. It suffices for them to indicate, in their introduction, what basic preliminary knowledge is required for the reader to understand the contrast of their research and on what level the work has been created. In contrast, for scholars writing in the field of inter-religious studies, the identity of the reader or audience is crucial in most, if not all, case. It is important for such an author to know both the faith background and the level of knowledge which the reader brings to the work. That is why, more than in any other branch of knowledge, we see that authors who write about a faith other than their own or try to introduce their own faith to others, mention for whom a given work has been produced.

This fact is due to a number of reasons, the discussion of all which takes us far from the topic of this paper. To allude to it, however, one such reason is that if one were to read a work on something other than his own religion, misunderstanding is highly probable because the reader tries sometimes subconsciously, to understand an issue about the other faith in the context of his own faith. As an example, a Muslim or Christian might consider the role of the mosque in Islam to be entirely identical to the role of the church in Christianity, but this is far from the case. A clearer example for the difference in Muslim and Christian understandings is the Gospel itself. Based on Quranic teachings, Muslims believe that the Gospel like the Torah and the Quran that were revealed to Moses (a) and Muhammad (s) respectively, is a book which was directly revealed to Jesus (a), a point which is surprising to most Christians. Muslims are equally surprised when they are informed that Christians do not know of any book revealed to Jesus himself.

The title of this paper, Jesus in the Quran, is not an exemption with regard to this issue. A Christian who is not a scholar of Islam might think that if ‘Christ’ had been chosen in the title instead of ‘Jesus’, the connotation would be different, since for him the former elevates the status of Jesus to divinity. Therefore, as far as Christian is concerned, the world ‘Christ’ has theological implications which the word ‘Jesus’ does not; but for a Muslim, using ‘Christ’ instead of ‘Jesus’ has not such implication, a point which shall be discussed later. Likewise, one might imagine that role of the Quran in Islam is the same as the role of the Gospel in Christianity, which it is not.

This article has been written with a Christian audience in mind who has only a surface understanding of Islam. Although the different words and their connotations cannot be explained in every case that they arise, as that would take a way from the main focus of the article, an effort has been made to do so when necessary.

As we know, the verses of the Quran regarding Jesus have been discussed frequently by Muslims and Christians from different perspectives, some of which have been criticized by the Quran itself. The Quran does not limit itself to presenting its own view on Jesus; rather, it mentions and takes a stand against some of the other views as well. For Muslims, the Quran acts as a guideline for Islamic thought, and not just on the issue of Jesus. These guidelines have provided Muslims with insightful viewpoints as well as answers when confronted in a debate on the Islamic position.

With this in mind, this paper will attempt to categorize the Quranic verses on Jesus in a novel manner. An observant reader will be able to discern how, in addition to offering direction to explain one’s view, the Quran also provides a Muslim with certain guidelines for reasoning in the face of an opposing view. Needless to say, all of the more than ninety verses of the Quran pertaining to Jesus cannot be incorporated into an article such as this. Therefore, the more prominent ones will be selected and discussed in a manner that will sufficiently cover the major aspects of Jesus in the Quran. Nevertheless, prior to this a brief introduction of the Quran as well as a quick illustration of the Quranic perspective on Jesus Christ is necessary.

According to the Islamic faith, the Quran was revealed to the Prophet Muhammad (s) over a period of twenty-three years in 114 chapters about fourteen-hundred years ago. Although the Prophet is known to have performed other miracles, the Quran itself is the most important one regarding which God states:

If the men and Jinns banded together to produce the like of the Quran, they would never produce it like, even if they assisted one another (17:88)

God also strongly emphasizes that there is no internal inconsistency among the 6236 verses of the Quran and denies that the Quranic content is in any way mythical. The Quran also stresses that it is composed in a language that is clear and understandable for all those whose intention is to understand. As a side note, this is not to say that it is not possible for those with ill-intentions to interpret the Quran in accordance with their own motives. The revelation of the Quran was completed during the life of the Prophet who recommended that Muslims use it to guide them at any crossroad.

Most importantly, for Muslim the Quran is the word of God verbatim, and this is a point on which there is a consensus among Muslims. Not surprisingly, some recent Christina scholars have come to admit the Quran as the most historically accurate of scriptures that have been revealed to different faiths. It should, therefore, be clear that the role of the Quran for Muslims as a unique undistorted revealed text is different from how a Christian views the Gospel or the Bible. In Christianity, such a focal role is given to Jesus himself as opposed to the Bible.

What has been said so far is agreed upon by all Muslims. This is because the points alluded to are based on the Quran verses themselves. Therefore, regardless of their differences, Muslims as are generally in agreement to those matters which are central to the Islamic faith, such as the nature of the Quran itself. However, that is not to say that no Muslim scholar has ever said or will ever say something other than what we outlined above. This point needs further explanation because it provides us with an answer to the question which might be ask concerning this article’s use of phrases like ‘the Islamic view’ or ‘consensus among Muslim’s on a given Islamic issue, including the issue of Jesus.. 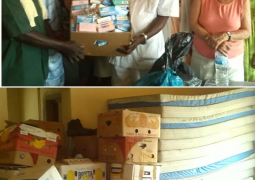 D2M worth of medical, other items donated to Kassagne community clinic