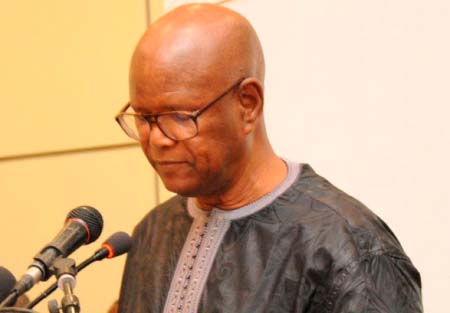 The Minister of Information and Communications Infrastructure has noted that 22-rule of Yahya Jammeh left “a fragile relationship and suspicion between journalists and the security forces” in The Gambia.

“The onus is now on all of us to change this ugly past to better and improve linkage of the two vital institutions,” Minister Demba Ali Jawo said on Monday at the opening of two training sessions for Gambian security forces on freedom of expression and the safety of journalists.

The training at Djembe Beach Resort were organised by Article 19 West Africa office in partnership with UNESCO and bankrolled by the European Union.

Minister Jawo said: “We are all witnesses to the unfortunate arrests, torture, disappearance and killings of journalists in the former regime including forced exile on media personnel and other voices of decent.

“Most of those persecutions were either rightly or wrongly blamed on security forces, hence the need to enlighten each other on the role of security forces in a democratic state.”

He pointed out that both Article 19 of the Universal Declaration on Human Rights, and Article 9 of the African Charter on Human and People’s Rights promote and safeguard the rights of journalists.

“The role of the media as the fourth estate in any democratic process has been universally accepted and the New Gambia would not be an exception,” he affirmed, adding that the spreading news and free flow of information can only happen under safe and secure conditions.

Himself a veteran journalist, the minister said the government of President Adama Barrow has put the empowerment of the media, access to information and freedom of expression as a policy objective.

“Therefore, the trust and confidence among the media, security forces and the community has to be at the forefront of this policy,” he said, adding that the government is committed to enforce the UN plan of action on safety of journalists.

In this regard, he said, plans are underway to repeal all repressive laws that inhibit freedom of expression and subject journalists to work under difficult circumstances.

“Discussions are at an advanced stage with stakeholders such as the Gambia Press Union, Article 19 and the Ministry of Justice to work together towards the development and enactment of the Freedom of Information Act and the formulation of a media friendly regulatory framework,” he said.

Attila Lajos, European Union Ambassador to The Gambia, also noted that the new government has a lot of work to do, including rewriting the bad legislation of the former government, if it has to fulfill its promise of protecting freedom of the press.

He said it is crucial to re-establish trust and a working relationship between security forces and media professionals in The Gambia and the population as a whole.

Leszek Jereme Bialy, UNESCO regional officer for West Africa, said through the training, cooperation would be strengthened to ensure that security forces uphold the right to freedom of citizens through a better understanding of the roles and functions of journalists and media professionals in a democratic society.

“Security forces need to be more aware of the role of journalists in a democracy and their own function to ensure a climate of security necessary to guarantee freedom of expression, freedom of the press, and human rights in general,” Mr Bialy said.