The Islamic Online University (IOU), a reputable online university that aims at changing the nation through education, recently held its awareness day to sensitize the public about its existence in the country.

The programme, held at the Supreme Islamic Council headquarters in Kanifing, drew attendance from different walks of life, including Islamic scholars.

The university has over 170,000 students in the world with so many branches all over the world, and the theme for this year awareness day is “the importance of seeking knowledge.”

In his remarks, the IOU country representative, Ousainou Allen, pointed out that this year’s awareness activities is important as it marks the second awareness day in The Gambia.

He said the awareness day was to let the people know about the existence of the university, and their aim is, changing nation through education, adding that this was why they decided to introduce many courses, after being in The Gambia for a year now.

The IOU has now moved its headquarters to The Gambia, with many branches in West Africa, and is also rapidly growing in population, Mr Allen disclosed.

He said the IOU was founded by Dr Bilal Philip, and now the university is present in 200 countries with a student population of 170,000.

He said: “There is no excuse to be ignorant in this generation: all you needed is to work hard because now access to education is easy but people seek knowledge based on their capacity.”

Mr Allen disclosed that by next semester they would introduce Masters’ degree courses.

The guest speaker, Skeikh Hamma Jaiteh, spoke at length on the importance of knowledge and seeking it.

He further stated that education is so important that if it is acquired should transform one’s life, reiterating that seeking knowledge has no boundary and limitation. 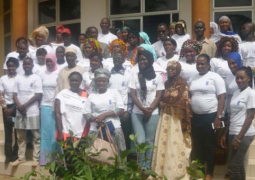