The prosecution in the criminal trial of one Modou Manga recently informed the Kanifing Magistrates’ Court, presided over by Magistrate Tabally, that the prosecution had closed their case.

Modou Manga was arraigned earlier before former Magistrate Buba Jawo in 2008 and charged with stealing 1952 bags of rice at the KGI, a charge he has denied.

In his defence, the accused Modou Manga told the court that he lives at Fajikunda and is a businessman.

He stated that he started working for KGI on 12 June 2007at the Kanifing warehouse as a storekeeper.

He said that on 16 April 2008, at the Kanifing KGI office, he received staff from the State House who came to get their supplies.

Manga added that after loading their vehicles, his assistant went and checked the vehicles.

“After my assistant had checked them, I also asked them to wait so that I could confirm the number of the bags of rice they took. They told me that they could not wait for me because they said they were in a hurry,” Modou Manga told the court.

“When I told my boss what had happened, the following day on 17 April 2008, he came to the store and told me that he wanted to take an inventory and after doing so, he left for his office,” the accused testified.

His boss later called him to meet him at Fajara, Manga told the court, adding that his boss told him that according to his inventory, there were missing bags of rice.

He also said that he told his boss that during his operation, he did not take any credit neither did anybody take rice from him.

“My boss then assured me to go home and he would see what he would do,” he further testified.

“Did you steal 1952 bags of rice?” asked the defence counsel.

“I did not,” the accused answered.

The case was then adjourned till 1 February 2011. 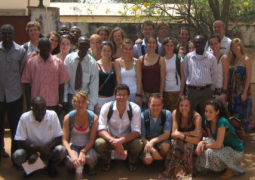