The interpol officer told the court that he refused a bribe of 18,000 and 5000 Euros from the three accused persons, before and after they conducted a search in their Brufut premises.

"The bribe was meant for the narcotics officers to escort them to the border in order for them to have their freedom," he told the court.

Testifying, PW2 told the court that he could recall what happened on 12 May 2010 while he was on duty at police post. He said he received information from an informant concerning the three accused persons, who at the time were residing at TAF Housing Estate.

The 1st accused, he added, told them that they came to the Gambia to buy fish and export it to Holland, adding that she then offered them 5000 Euros, which they refused, and went ahead to conduct the search.

He adduced that, during the search, they discovered two blocks of suspected cocaine, and the 1st accused made another offer of 18,500 Euros for them to escort them to the border so that they can escape.

"I called the officer commanding drug squad at Brikama Police Station, who also came and found us at the scene. A further search was conducted on the 2nd accused person's house where one block of cocaine was found," he further stated.

The prosecutors claimed that the accused persons, on 12 May 2010 at Taf Housing Estate in Brufut in the Western Region, were found in possession of three parcels of cocaine, a prohibited drug. 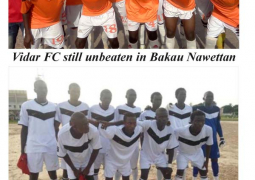