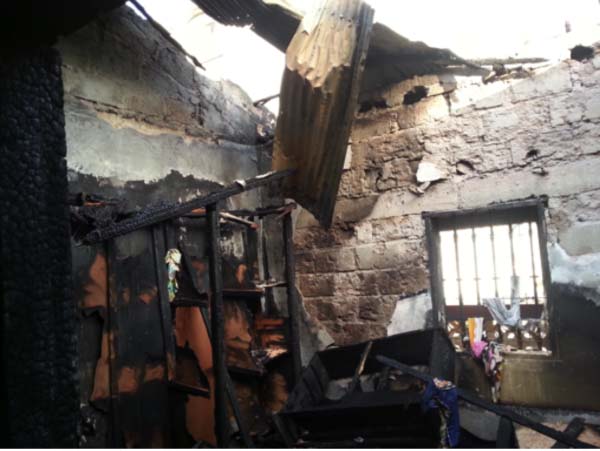 A fire outbreak reportedly caused by an electrical problem Saturday evening consumed items estimated to be worth more than D1 million in the compound of the renowned kora singer, Jaliba Kuyateh, in Brikama Nyambai.

The burnt house was a line house situated between a storey building and another line house in Jaliba Kuyateh’s compound, while he was reportedly away in the provinces.

Speaking to The Point reporter on Sunday at Kuyateh’s compound in Brikama Nyambai, Fatoumatta Susso, his wife, said the unfortunate incident happened on Saturday evening around 6:15 pm when the electricity supply was restored.

Since in the morning of that day there was no electricity, and when it was restored at around 6:15 p.m, the house caught fire and everything ended up burning in ashes, she said.

Immediately the house caught fire, people inside came out and started running, she said, adding that the neighbours came in large numbers to help put out the fire.

One of their neighbours, called Kalipha, who works with the fire service, managed to get inside the burning house and started opening the doors so they could get access to put out the fire, he said.

She added that the fire services in Brikama were called and they responded quickly, and together with the neighbours they were able to put out the fire.

Susso disclosed that the house contained two apartments with toilets and dining rooms, but everything was consumed by the fire.

The house was completely destroyed, and at the time of the fire outbreak, her husband was in the provinces on trek.

She thanked the neighbours for their help, as they did everything humanly possible to put out the fire.

Aja Yafai Secka, Jaliba’s stepmother, said her two bedrooms and a parlour were also consumed by the inferno.

She thanked the neighbours for coming to their aid, adding that without their help it would have been difficult for them to put out the fire.

The fire consumed the roof, doors, clothes, beds, wardrobes, sofas, and everything in the house got burnt to ashes.

Another Charged for Giving False Information to GRTS DG