The trial involving 12 foreign Nationals in connection to drugs (Cocaine) proceeded yesterday before the narcotic court of the Banjul Magistrates' Court presided over by Magistrate Hilary U Abeke.

When the case resumed yesterday, Chief Inspector Abodoulie Ceesay who represented the National Drug Enforcement Agency applied for an adjournment on the grounds that investigations into the case recently concluded and that the case files has been sent to the office of the Director of Public Prosecution for legal advice.

Responding to the prosecution's application for an adjournment, Defence Counsel, E Chime told the court that it had been a long time since the accused persons were incarcerated and they had been denied access to visitors particularly their family members.

He advanced that his clients are all asthmatic patients and are finding it difficult to acclimatize with the type of food obtainable at their detention place. He applied to the court for his clients to be allowed access to their family members.

Lawyer Chime told the court if given access to their family members, it would go a long way in helping the accused persons.

"Your worship to further buttress my submission, the 1st accused daughter came all the way form to see his mother but was denied access to see her and she went back," Chime told Magistrate Abeke.

"They are finding it difficult to use the food at the detention centre and I submitted that three to four people be visiting the accused persons to provide them foods and other things."

Camara said he had no objection to the application but added that he will not entertain any further application for an adjournment from 7th June 2010 because the accused persons has constitutional rights for speedy and fair trial.

Magistrate Hilary U Abeke after hearing from both side granted the prosecution's application for an adjournment. He said the court will consider the application for the accused to have access to their family members on the next adjourned date.

The case was at that stage adjourned to Wednesday 7th July 2010.

The accused persons, all remanded in custody, were escorted to and from court under tight security. 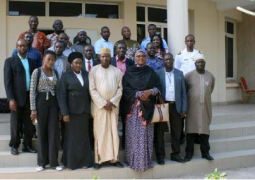