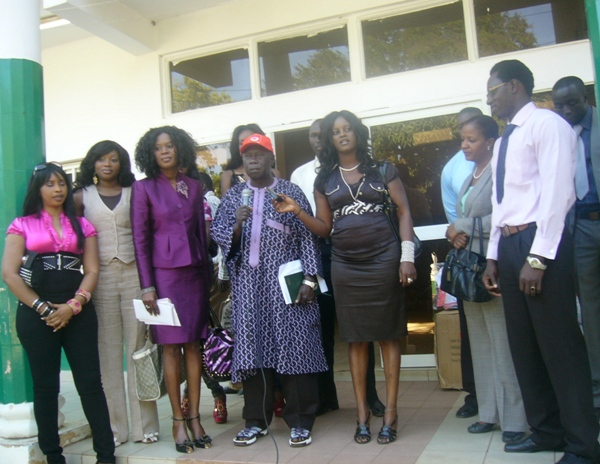 Fatou Camara chief executive officer of I-Media company, the parent body of the famous ‘Fatou Show’ on GRTS TV, yesterday made a handsome donation to the Children’s Ward of the Royal Victoria Teaching Hospital.

Speaking at the presentation ceremony held at the RVTH Children’s Ward, Baboucarr Ngum, Public Relations Officer of the RVTH, lauded the initiative, noting that the gesture will go a long way in raising the morale of the children.

According to PRO Ngum, Fatou Camara has always been supportive of the Children’s Ward even without Christmas, urging her and her partners to continue their support to the ward.

Noting that government cannot do it alone, PRO Ngum called on other institutions to come in and support the health sector. He added that health service delivery is very expensive, thus the need for Gambians and non-Gambians alike to emulate Fatou Camara’s gesture.

In handing over the gifts, Fatou Camara said the gesture comes from I-Media Company, the parent body of the Fatou Show on GRTS television.

“We have been doing this gesture for three years now. Every year, we come over to the hospital to present gifts to the sick children,” she stated.

Recalling her school days, when they used to take gifts for the paediatric hospital during Christmas, Fatou noted that I-Media is a new business, but it is able to collect gifts from big institutions and companies, and donate to the hospital.

She commended Comium Gambia Limited, Gamwater, Bank PHB and Coca-Cola for their support, noting that I-Media will continue to do its best to support the sick children. She also commended President Yahya Jammeh and the First Lady for their unflinching support to the health sector.

Mrs Kumba Daffeh-Kah, proprietress of ‘Tresor the Closet and Beyond’, commended Fatou Camara for the gesture, noting that they are pleased to be part of the initiative.

According to her, the initiative should be emulated by all Gambians, especially young people, adding that the gesture exemplifies Fatou’s love for her country.

Joeking Mendy, a representative from Comium, expressed his company’s resolve to always help the various sectors, especially the health sector, noting that Comium deemed it necessary to be part of the initiative.

He assured the beneficiaries of their continuing support to the sector, as they have been sponsoring projects since their inception.

Landing Camara, matron at the Children’s Ward, delivered the vote of thanks. He commended Fatou and her partners on behalf of the board and management of the RVTH and the parents of the children.

Meanwhile, the ‘Fatou Show’ Christmas party for kids will take place tomorrow Saturday (Christmas Day) at the . A ticket for the party is D250 for every child, but free for parents.

As a parent herself, Fatou told The Point that she has put in place all necessary measures for the children to have security, including first aid services.