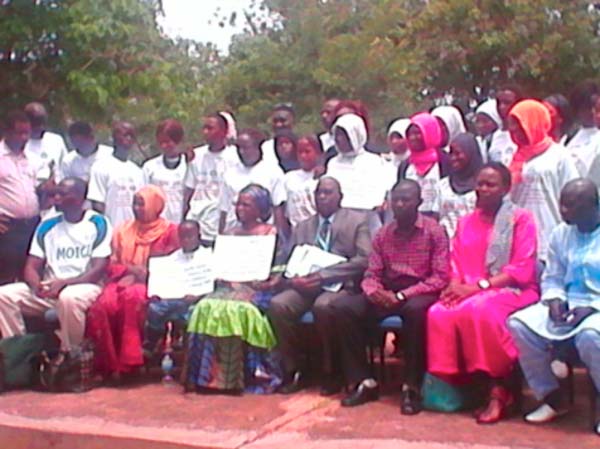 Non-governmental organisations, development partners and other institutions advocating for the rights and welfare of children have called for collective and concerted efforts to end child marriage in The Gambia.

The called was made on Thursday at the regional education directorate Region 4 in Mansakonko, Lower River Region during the celebrations marking the International Day of the African Child (DAC).

The forum was jointly organised and implemented by UNICEF, Office of the First Lady, Operation Save a Baby Initiative, Department of Social Welfare, ChildFund, CPA, Young People in the Media and the Department of Information Services.

This year’s theme for DAC is “25 years after the adoption of the African Charter on the Rights and Welfare of the child, accelerating our efforts in ending child marriage in Africa.”

Speaking at the celebration, Salifu Jassey, UNICEF child protection specialist, said the African Charter on the rights and welfare of the child prohibits child marriage, among others.

He said after 25 years since the adoption of the ACRWC and near-universal ratification of the charter by African states, child marriage remains a brutal reality for millions of girls across Africa.

“It is a huge obstacle to the attainment of the MDGs which ends this year and unless something is done to accelerate the abandonment of child marriage, it will remain a huge obstacle to attaining the Sustainable Development Goals (SDG’s),” Mr Jassey said.

He said child marriage is often instigated by poverty, lack of education, gender stereotyping, discrimination and negative cultural practices, as a result denying girls the right to live healthy and fulfilling lives.

He said more girls and young women in Africa and in The Gambia still run a great risk of encountering the many consequences associated with child marriage, one of which is teenage pregnancy.

“UNICEF will reinforce its advocacy for an end to the practice through stronger collaboration with the Government of The Gambia and other national and international partners, while continuing to harness the leadership of community and religious leaders, as well as community members to change their attitude towards the practices that hurt children, especially girls,” Mr Jassey said.

Speaking on behalf of the First Lady Zineb Yahya Jammeh, Fatou Mass Jobe said the day was meant to reflect on the welfare of children, particularly in Africa.

Mrs Jobe Njie who is the executive director of Operation Save a Baby Initiative said the DAC is also meant to present an opportunity to all stakeholders on children’s rights including the government, non-governmental and international entities to reflect on issues affecting children in the regions.

She said the theme highlights the need for all to take stock of the progress made so far in the fight against child marriage and to intensify efforts to end “this cruel and undesirable practice”.

Mrs Jobe Njie said child marriage have been reported in all rural communities in The Gambia, with girls at the age of 11 and 12 given away to the older persons against their will.

“It is evident that child marriage leads to the phenomenon of adolescent pregnancy,” she said, adding that girls who are pregnant before the age of 15 have double risk of maternal death and obstetric fistula.

Filly Nyassi, representing the Department of Social Welfare, under the Ministry of Health, said the department has been promoting, supporting, advocating and protecting the rights of the most vulnerable children in the society.

He said most children are experiencing lots of challenges which have a negative impact in their full development.

Mr Nyassi said the right to free and full consent to marriage is recognised in the Children’s Act 2005.

Under the Act, consent could not be free and full when one of the parties involved is not sufficiently mature to make an informed decision about a life partner.