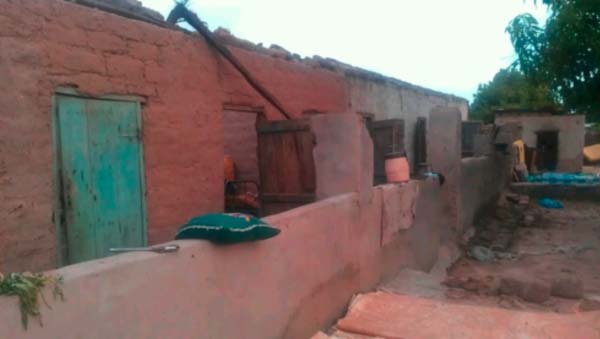 Monday’s heavy rainfall has caused serious destruction of houses in Kerewan ward in the Lower Fulladu West of the Central River Region South.

The compounds that were affected in one of the villages included that of one Alasan Baldeh, who lost five line houses, chicken, clothing, rice, coos among other valuable items.

A family of sixteen is reported homeless, with members of the family currently lodged at a relative’s compound in the same village.

According to the family head, Alasan Baldeh, all their foodstuffs was destroyed as a result of the disaster, which occurred around 3:20 a.m. on Monday.

The other affected residents in the village and nearby villages included the compound of the Sowe kunda family, who reportedly lost six houses, leaving them in a very dire situation.

The Baldeh kunda family also lost a bakery house to the heavy wind, and one Omar Sey of Boiram village also reportedly lost all his belongings or goods including rice, groundnut, coos, goats and poultry.

In a village called Alalui, one Abdou Boye lost some of his three line houses each of which contained five rooms.

The compound of the alkalo of the said village, Alagie Mod Maram Boye, was also affected and he lost four bags of coos. One Abdou Ndow of the same village lost part of his house.

Speaking to The Point, the affected person said they are currently homeless and have managed to lodge at relatives’ compounds.

They are, therefore, calling on the national disaster management agency and others, such as private sector institutions, individuals, well-wishers, NGOs and the government, to come to their aid, as they are in dire need of help.

“We all know the situation upcountry at the moment, where survival remains a major problem for certain families,” one of the affected persons said.

The affected family members also called on the national disaster office to go and assess the situation in their respective homes, as the situation is very worrying to them.

Samba Wadda, ward council for Kerewan ward in the Central River Region, lamented the situation of some of the affected families face, as they are homeless at the moment.

He said the heavy rain fall caused serious destruction as most of the villagers in his ward are suffering, adding that to lodge someone at this time of the rainy season is not an easy task.

He, therefore, called on the authorities responsible to come and assess the situation and give a helping hand to the affected families, as the situation is very hard.

Also speaking to this reporter after visiting the area, the National Assembly member for the said constituency, Hon. Omar Thorp, expressed sympathy for the affected families, and that they lost some of items ranging from rice, coos, animals, chicken, goats, and clothing among other very important materials.

He called on philanthropists, NGOs, civil society, well-wishers, the government, and persons both in The Gambia and abroad, to come to the aid of the affected families.