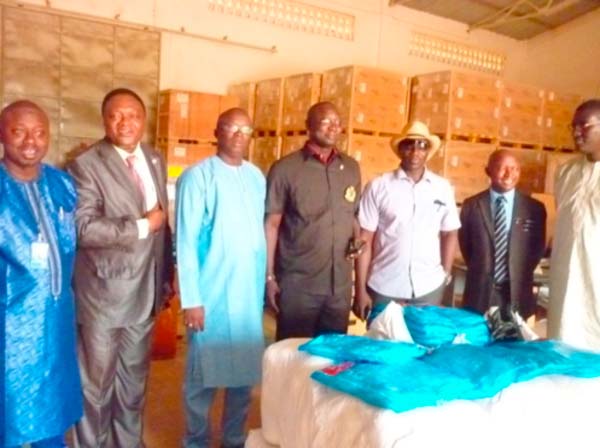 The presentation, attended by two ministers, namely Tourism and Culture Minister Benjamin Roberts and Health Minister Omar Sey, as well as the chartered president of Rotary Club of Brusubi, was held on 22 November 2016 at Kotu Central Store.

The total number of mosquito bed nets handed over to the health ministry was four thousand for onward distribution to the communities.

In receiving the items, minister of Health, Hon. Omar Sey, expressed gratitude to Rotary Club of Fajara for their continued support to the Ministry of Health and Social Welfare.

He said The Gambia is having a malaria prevalence of 0.02%, which means that “we are going towards pre-emanation”.

The government, he noted, had been making series of interventions on bed net distribution to ensure the country achieved the set out goals for malaria control

He said people living in the suburbs are being reached with bed nets although it is not enough.

Therefore coming up with such an amount of bed nets is a step in the right direction, he noted.

The health minister further hailed the Rotary Club of Fajara for their outstanding support towards the health sector.

He said their support is in line with what the President of The Gambia is advocating for in the country.

He said Rotary Club of Fajara should be proud of themselves as Rotarians as what they are doing is in line what the strategy of this country.

Hon. Sey further said: “On behalf of the Gambian leaders I wish to take this opportunity to thank the members of Rotary Club of Fajara and, by extension, Rotary Club International for supporting the Government of The Gambia under the health sector in particular.

He said the bed nets will be distributed to the farthest places in The Gambia especially to those around the boarder areas.

Speaking at the handing-over ceremony, Minyan Jobe, vice president of Rotary Club of Fajara, said RAM – Rotarians against Malaria - is a voluntary organization of Rotary Clubs and Districts to work on malaria control.

RAM aims to achieve worldwide control of malaria through increasing availability of bed nets, making education available on causes, symptoms, treatments, and preventions of malaria, connecting people with a focus on linking potential donors to projects, and encouraging discussions on malaria control.

Mr Jobe also said that handing out nets to homes is a proven, trusted solution. In high coverage areas, bed nets can reduce the incidence of malaria by 90 percent through programmes such as Changing Lives and Malaria kills, and Nets save lives.

“We protect families from this deadly disease with every net delivered,” he said.

He also dilated on the cordial relationship between the Ministry of Health and Social Welfare and Rotary Club of Fajara.

“Rotary Club of Fajara has been very supportive of the health sector and will continue to give them support,” he said.

He also thanked their donor country in Canada for the magnificent gesture that will go a long way in reducing malaria cases in The Gambia.