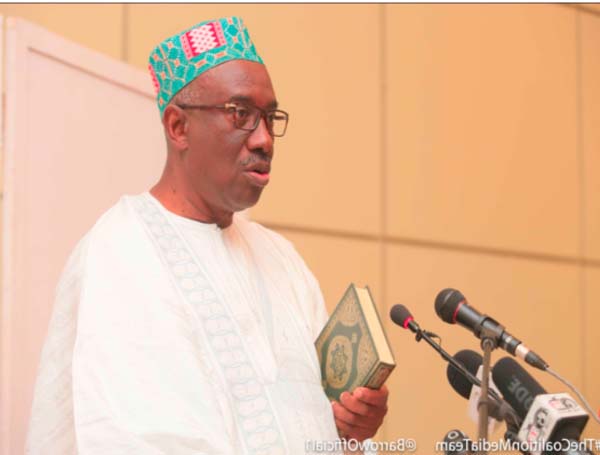 Hassan Bubacarr Jallow has been appointed and sworn in as the new Chief Justice of The Gambia.

The swearing-in ceremony held yesterday at the Kairaba Beach Hotel was presided over by President Adama Barrow, and attended by Cabinet ministers.

In his remarks on the occasion, the newly-appointed Chief Justice, Hassan B. Jallow, said he was honoured by his appointment under the leadership of President Adama Barrow.

He promised to live up to the prescribed oath of office to do justice without fear or favour, affection or ill-will in accordance with the constitution and other laws of The Gambia.

“I have heard on a number of occasions the president reiterate his commitment for the judiciary and to its effectiveness. This declaration coming from the Office of the President to maintain the independence of the Judiciary is, indeed, very assuring and an excellent starting point for a new Chief Justice.”

Chief Justice Jallow added that an independent Judiciary delivering excellent and effective rule of law, justice, peace and progress is an inseparable element of good governance, which The Gambia would work continuously to embed in the community.

He further promised that at the Judiciary they would do their best to ensure that the justice system and machinery meet the expectations of the community and the required international standard.

He assured the Gambian people that they would do their best and would work with government agencies and the entire legal fraternity, as well as the community at large, to secure an independent and effective system of justice in The Gambia that would cement the rule of law.

He acquired LLB honours first class, Bachelors of laws in 1976 at the University of Dar-es-Salaam in Tanzania. He also holds Barrister-at-law in 1977 at Nigerian Law School in Lagos. He also acquired LLM, Master of Laws (public international law) at London in 1979.

Chief Justice Jallow was called to the Nigerian Bar and the Gambia Bar in 1977. He was enrolled as a barrister and solicitor of the Supreme Court of The Gambia and Federal Republic of Nigeria.

He has long and diverse experiences at senior operational and policy management levels at both national and international levels as a Legal Adviser, prosecutor, cabinet minister, legislator and Judge.

He also served as acting Registrar General at the AG Chambers and Ministry of Justice in charge of registration of companies and businesses, patents, trademarks, administration of estates, conduct of marriages, criminal and civil litigation.

He was also appointed as AG and Minister of Justice of The Gambia, chief legal adviser to the government, and member of the cabinet and ex-officio Member of Parliament. He also served as Justice of the Supreme Court of The Gambia.

He was also appointed by UN Security Council as Chief Prosecutor at the United Nations International Criminal Tribunal for Rwanda (UNICTR) and under-Secretary General of UN. He was responsible for the investigation and prosecution of those who played a leading role in the Rwandan Genocide of 1994.

He was a member of UN Panel to investigate UN response to allegations of sexual abuse by peace-keepers in Central African Republic in 2015.

He was also a member of the group of experts selected by the Organization of African Unity to prepare preliminary draft African Charter on Human and Peoples’ Rights.

He was chairman, governing council of the African Centre for Human Rights and Democratic Studies in Banjul. He serves as Chairman, Commonwealth working group of Governmental experts on Human Rights.

He was honoured commander of the National Order of the Republic of The Gambia (CRG).

Among his publications is the Law of Evidence in The Gambia in 1998, Law, Justice and Governance: selected papers in 1998, The Law of the African (Banjul) Charter on Human and Peoples’ Rights in 2007, Introduction to Zikr/Wirds of the Tariqat Tidjanniyya in 2011, and Journey for Justice in 2012.

Previous:
Gambia Trade Fair 2017 set for April
Next:
There can never be peace when there is no justice, says Barrow