Gunjur on Saturday beat Brikama 3-1 in the quarterfinal game played at the Serrekunda East Mini Stadium to progress to the semi-final of the 2016 FIBank-sponsored Super Nawetan zonal football tournament.

Gunjur made an astonishing start to the game, and opened the scores striker Malang Jassey alias Uncle in the 10th minute of the game to give South boys the lead.

Brikama responded back for an equaliser but could not break through Gunjur’s formidable defence line thus the first half ended 1-0 in favour of Gunjur.

Upon resumption of the game, Brikama injected several fresh legs to strengthen their attacking tag and dominated the game.

They did level the scores through Bakary Kuyateh in the 52nd minute of the game to cancel Malang Jassey’s 10th minute strike to make it 1-1 after a deadlock in the first half.

Midfielder Mbemba Fatty aka Andrea Iniesta brought Gunjur back in front after 63 minutes of the game after slashing through Brikama’s defence line to make it 2-1 for the South boys.

Midfielder Mbemba Fatty alias Andrea Iniesta sealed victory for Gunjur in the 65th minute to inspire South boys to the last four of the Super Nawetan and also complete his brace.

Elsewhere, Banjul thumped BEM 2-0 in the other quarterfinal game played at the Serrekunda West Mini Stadium to advance to the semi-final. 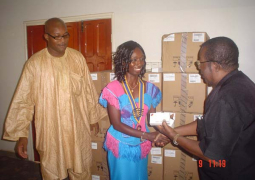