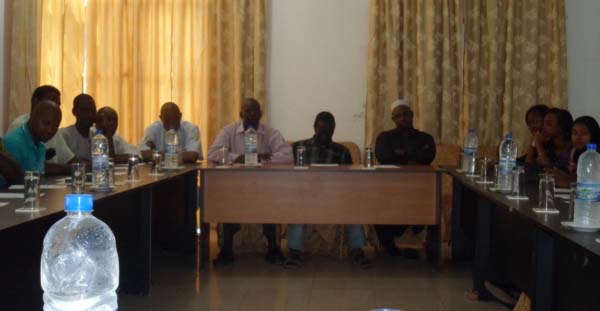 The Gambia Standards Bureau has embarked on series of proactive engagement of stakeholders of the various standards it has published as official national standards.

The Bureau kick-started this move by holding a sensitization forum with enterprises engaged in the packaging of potable water at the NaNA Conference Hall, on Wednesday 7 May 2014.

The Bureau mobilized about 30 drinking water processors from all over the country with the objective of information-sharing to raise the awareness of these enterprises on published standards in water and related issues, such as hygienic practices and labeling and to promote their implementation at the enterprise level.

In addition, other services the Bureau provides to facilitate trade and ensure quality of products and services - notably testing, certification and metrology (calibration of measuring devices) - were featured as part of the programme.

In his opening statement, the Director General of The Gambia Standards Bureau, Papa Secka, thanked the participants for their response and urged them to actively participate, seek clarifications on how these standards may be of value to them and table issues of concern in standards and quality.

He spelt out the mandate of the Bureau, while stressing that the Bureau is not a regulator but rather a facilitator for industrial development, promotion of standards and quality of products and services and thereby promote the health and safety of consumers.

The DG reiterated and emphasized to the participants that whoever wishes to stay in business must take the necessary measures to adhere to the relevant standards applicable to their operations and any other additional requirements the regulator may specify.

He pointed out that implementation of relevant standards not only makes business sense in terms of profitability and staying ahead of competitors but assures compliance with the relevant regulations since the latter are generally referenced to applicable standards as a transparent approach to enforcement.

He called on stakeholders in all sectors of the economy to avail themselves of the wealth of information services offered freely at the WTO Technical Barriers to Trade (TBT) Enquiry Point and Standards Information Centre of the Bureau.

The presentation covered the different sections of the standards thus exposing to the participants the key requirements specified in all these standards.

They were unanimous in acknowledging that the forum had clarified quite a lot of misconceptions they had; for example the difference between packaged drinking water and natural mineral water, the key elements that should be provided in a label of a packaged product and basic hygiene.

The other six standards on rice, sugar, tomato paste, edible fats and oils, flour and peanuts (groundnuts), were also showcased.

Mr Abdoulie Cham, the metrologist at the National Metrology Laboratory of the Bureau, gave an overview of their work and the importance of accurate measurements in preventing waste, which costs money.

In his closing remarks, the vice president of the Association of Packaged Drinking Water Producers, Sulayman Jammeh, thanked the Bureau for organizing such an important gathering.

He advised his colleagues to endeavour to use these national standards in their water production work to ensure the supply of safe drinking water and also to comply with the requirements of the regulatory authority, which in this case were the Food Safety and Quality Authority.