Ret Sam and Napz, the two leading vocalists (rappers) in the Grandiz Kroo, have announced the recording of another mix tape, this time calling it an X tape.

The two hip-hop singers said every year they release mix tapes which is why on December 25 they released another calling it an X tape.

The rappers said it is called X tape because they want to release it to the fans for Xmas and New Year entertainment.

They were quick to say the X tape will be available on the internet for free, adding that it will also be distributed to the fans and loved ones at no cost.

The tape is a 15-track album produced by their own studio called the Hardcore Records.

The two rappers have worked with several international producers and have done some duets of superb quality.

“Our vision is beyond the Gambian music; we want to promote our music to international standards. We want to be heard all over the world,” they said.

According to the duo, Hardcore Records is a local independent record label based in Bakau.

“They worked on a free hip hop project titled the X tape, which was released on December 25, 2013 to the fans as Christmas gift,” said Ret Sam and Napz. 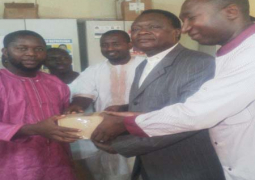