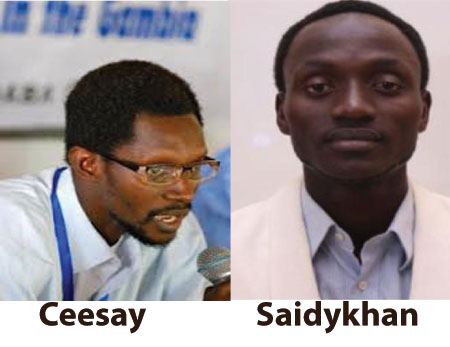 The Gambia Press Union, GPU, has expressed serious concern over what it referred to as reports from two journalists that they have received email messages which threaten them with death, and called on the police to investigate the matter and take appropriate action.

In a statement issued Wednesday, the Union said it is seriously concerned about reports from Ababucarr Saidykhan, a freelance journalist and Babucarr Ceesay, the 1st vice president of the Union, that they have received individually an email message which threatens them with death.

“The two journalists informed the executive committee of the Union of the threatening email they received on Thursday, 25 October 2012. The alleged email message is reported to have been sent from the following email address: mofalajato@yahoo.com,” the Union stated.

Part of the message, it added, reads, “You are stubborn guys who want to destroy the image of the APRC Government and our affectionate President Yahya Jammeh. You think that you can apply for permit to bring the Tunisian, Egypt, Algeria, Syria and Libya situation here. I will come with my team of patriotic killers who kill you for the love of our country and our president ... I have stepped in voluntarily to kill all of you and if you deny this just ignore my warning.”

According to the Union, cognizant of the fact that the police are mandated by the 1997 Constitution of The Gambia to enforce law and order in the country; and given the gravity of the matter, the Union was concerned that this alleged threat is serious and needs to be investigated by the police with a view to taking appropriate action.

Readers may recall that a young man who sent a threatening text message to Journalist Abdoulie John of Jollofnews was arrested and prosecuted by the police.

He was prosecuted by the police after Abdoulie John had lodged a criminal complaint at the police, and the executive board of the Gambia Press Union subsequently brought the case to the attention of IGP Yankuba who asked the police to act on the matter.

The suspect was subsequently convicted and given a three-year suspended sentence by the Bundung Magistrates Court.