God can only multiply what is put into his hands

“The wicked man earns deceptive wages, but he who sows righteousness reaps a sure reward.” (Job 11:18)

“As I have observed, those who plow evil and those who sow trouble reap it. At the breath of God they are destroyed; at the blast of his anger they perish.” (Job 4:8-9)

Whatever the earth receives by way of a seed, will be transformed. The seed sown will grow into a plant or a tree that will produce fruits in due time. Seeds are meant to guarantee continuity.

When that seed is received by the soil it will also grow to become a plant; and the cycle continues. In other words, it is what the soil receives that will be transformed into a plant that will in turn produce fruits for seeds. Actually, it is considered a natural process, but in fact it is a set principle sustained by the Creator of the earth. As long as there is seedtime there will be a harvest. Whoever sows will reap in his/her field of endeavour. It is a sacred principle that works always.

Each time we offer a helping hand or restore smiles to a face wrinkled with hardship and trials; each time we lift someone’s head to soothe the pain or bring them relief we are performing a good deed that will not go unnoticed by God. Yes, we are sowing a seed, each time we intervene to change a desperate person’s story.

Being kind to our fellow men – not in a bid to impress people - goes down in God’s annals as a notable deed that will be rewarded.

We have been made in the likeness of God therefore whatever gesture we make in this regard pleases God. Our Lord Jesus further illustrated this point when he defined it thus: each time we feed the hungry, clothe the naked, provide shelter to the homeless such a gesture would have been directed at him. “For I was hungry and you gave me something to eat, I was thirsty and you gave me something to drink, I was a stranger and you invited me in, I needed clothes and you clothed me, I was sick and you looked after me. I was in prison and you came to visit me.” (Matthew 25:35) “I tell you the truth, whatever you did for one of the least of these brothers of mine, you did for me.” (Matthew 25:40)

Just as people can sow good deeds, others delight in sowing evil deeds also. The outcome is the same however. Each action will be rewarded for what it is.Wicked deeds guarantee a fatal end. With good deeds, expect a blissful finale. Apostle Paul neatly sums it up thus: “Do not be deceived: God cannot be mocked. A man reaps what he sowsThe one who sows to please his sinful nature, from that nature will reap destruction; the one who sows to please the Spirit will reap eternal life.” (Galatians 6:7-8)

Lack of direction and character

Samson held high office as judge in Israel and God gave him enormous physical strength with which to combat their enemies – the Philistines. But Samson was more interested in women to the extent that he slept with a prostitute and another woman from the enemy’s camp. It all seemed like a joke until this woman, Delilah, betrayed him. Samson who alone killed a 1,000 Philistines with the jaw-bone of a donkey was seized and his eyes were gouged (pulled out) and he was made a public ridicule.

Called to save the people of Israel Samson selfishly pursued personal pleasure and thus fell into the hands of his enemies. His unlevelled-headedness led to his doom. He sowed foolishness and reaped disgrace. When they finally captured him with the complicity of Delilah, after several failed attempts, they sang: “Our god has delivered our enemy into our hands, the one who laid waste our land and multiplied our slain.” (Judges 16:24)

Andrew one of the twelve disciples brought a youngster to Jesus who had in his possession five loaves of bread and two fish just when they were debating how to feed 5,000 men - not counting the women and children. That lad offered all he had to eat miles away from home. It could have been his lunch or picnic pack, but he offered it because Jesus had ordered that the crowd that was following him be given something to eat.

What was considered a puzzle for the disciples who suggested sending the people away because of the costs involved became a stunning miracle. Our Lord Jesus took the items that were presented to him and he gave thanks to God, the Father and multiplied them. After the crowd was fed, twelve basketfuls were counted as leftovers.

“They all ate and were satisfied, and the disciples picked up twelve basketfuls of broken pieces that were left over.” (Luke 9:17)

Good deeds are like indelible ink, they are etched in stone and they leave a lasting impression in the minds of those who benefit from it.

“Consider now: Who being innocent, has ever perished? Where were the upright ever destroyed?” (Job 4:7)

We must not rest on our laurels 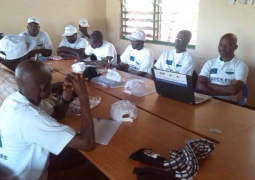