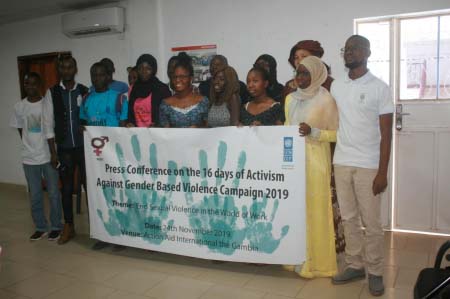 The press briefing was held at Action-Aid Head Office in Kanifing, where NGBV national coordinator Fallu Sowe, said this year marks the 27th year of the 16 Days of Activism against GBV, which runs from 25th November to 10 December, adding that human rights day symbolizes the link between violence against women and human rights.

“The global theme for this year is ‘End Gender-Based Violence in the world of work’, and the aim of our campaign is to harmonize our efforts to end all forms of sexual and gender based violence in The Gambia,” he said.

He said the theme reflects the core principle of the transformative 2030 Agenda for Sustainable Development Goal and reinforces the UN Women Campaign commitment to a world free from violence for all women and girls.

According Mr Sowe, Gender Based Violence is a grave human rights violation and because it inequitably affects women and girls, it is otherwise referred to as violence against women and girls.

“It comes physical, sexual, psychological and emotional forms, all of which have serious consequences ranging from immediate to long-term effects.”

He reminded the government and people that Gambia is a signatory to many international and regional Treaties and Conventions which protect women and children from all forms of violence. He said the Treaties include the Conventions for the Elimination of all forms of Discrimination Against Women (CEDAW), Convention on the rights of the Child and the Maputo Protocol.