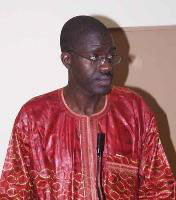 Garass Bi FC of Barra on Sunday beat Gamcel FC of Mbollet Ba Village by a goal to nil in the final of the Dr Njogu Bah-sponsored Nawetan Competition.

Hundi Babou scored the only goal of the game for Garass Bi in the 22nd minute of the game from a penalty spot when defender Ousman Sidibeh brought down Alhagie Bah inside Gamcel FC’s eighteen-yard box.

Gamcel, who lost to Ndofan FC in the 2011/12 final, fought hard and created a number of goal-scoring opportunities but could not capitalise on them thus the game ended 1-nil in favour of Garass Bi FC.

As winners, Garass Bi went home with a giant trophy and a cash prize of D5,000 while Gamcel collected a consolation prize of D3,500 as runners-up.

Speaking to reporters shortly after the game, Pa Tijan Sonko, head coach of Gamcel FC, said they have taken the defeat in good faith.

He added that his boys played well and created chances but could not capitalise on them, saying some of his players were not going for training, which also contributed to their defeat.

Albinos: Why are they killed in Tanzania?