The objective of the training, held in Kerewan, was to create awareness about the harmful effects of FGM on the health of women and girls.

It was staged to build community resilience in the fight to end the centuries old traditional practice that precedes Islam.

The two-year project is funded by UN Women, an international women’s rights agency.

She called on women to be proactive in the education of the girl child, noting that it contributes to human development and poverty reduction.

Chief Fabala Fadia Kinteh of Lower Badibou District assured Gamcotrap of his district’s support in the crusade to promote and protect the health and wellbeing of women and girls.

Chief Kinteh called on CBF to be vigilant in raising awareness on abandonment of FGM and remain goodwill ambassadors of Gamcotrap.

She said the training would contribute to empowering and equipping the participants about the menace of FGM and also give them the opportunity to share their experiences on the negative effects of the traditional practice.

Mrs Bojang-Sissoho hailed the district authorities in Badibou for their support in the implementation of the project.

Aja Fatou Njie-Fofana, deputy national women’s mobiliser, who doubles as Gamcotrap’s district coordinator for Jarra and Kiang, said the training programme aims at complementing The Gambia government’s efforts in protecting the health and rights of women and the girl child. 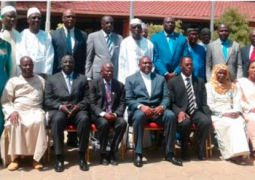