"The Gambian economy has performed well in recent years. Real Gross Domestic Product (GDP) at factor cost grew by an average of nearly 6.5 percent during 2007-2009, while annual inflation averaged less than 5 percent," according to a statement by an IMF mission to The Gambia.

A press release issued by the IMF on 20 May 2010, announced that an IMF mission, led by Mr. David Dunn, the Deputy Division Chief African Department, visited The Gambia from 7 to 20 May, 2010, to conduct discussions for the 2010 Article IV consultation and the seventh review of The Gambia's programme under the Extended Credit Facility (ECF).

The mission met with the Minister of Finance, Momodou Foon, Minister of Trade, Employment, and Regional Integration, Abdou Kolley, the Minister of Energy, Ms Sira Wally Ndow-Njie, Minister of Information and Communication Infrastructure, Alhaji A. Cham, Governor of Central Bank of The Gambia (CBG), Momodou Bamba Saho, other senior officials of the government and the CBG, and representatives of the business community, civil society, and The Gambia's development partners.

At the end of visit, Mr. Dunn, mission chief for The Gambia, pointed out that "despite the global economic crisis in 2009, and a sharp drop in tourism receipts remittances, real GDP growth remain strong, at just over 5 percent, led by the continued rebound in agriculture.

"Inflation fell to less than 3 percent at end-2009, largely reflecting a tightened monetary stance for much of the year and steady local prices for food and fuel, even though global prices for these commodities had picked up."

"Despite a modest up-tick in early 2010, inflation has remained low at 4.1 percent in April. Gross international reserves remain at a comfortable level, after reaching nearly 6.5 months of imports at end-2009."

Mr. Dunn explained that the "interest costs, especially on domestic debt, continued to consume a considerable share of government revenues. He said overruns in government spending led to a significant fiscal deficit and substantial domestic borrowing in 2009, which he noted, added pressure on Treasury bill yields and interest costs.

"While the fiscal out-turn in the first quarter of 2010 was better than anticipated, it was insufficient to recoup the large fiscal slippage in 2009. As a result, the programme target on the ceiling on the cumulative basic fiscal balance for March 2010, was exceeded by nearly GMD 90 million (or about 0.3 percent of GDP)," the IMF official added.

To ease pressure on interest rates and to create savings from a lower debt burden, he said the government is committed to returning to the programme fiscal path for 2010.

The statement added that as part of the Article IV discussions on surveillance - the main role of the IMF under its original mandate - the mission extensively reviewed developments in the financial sector, including supervision by the CBG.

"With regards to the ECF-supported programme, overall performance against the March 2010 targets was good, except for the fiscal slippage. The mission welcomes the authorities' corrective actions to strengthen fiscal discipline and budget procedures." 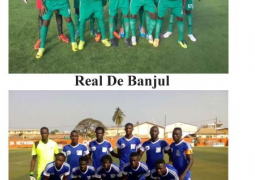 GFF domestic league to wind up at weekends