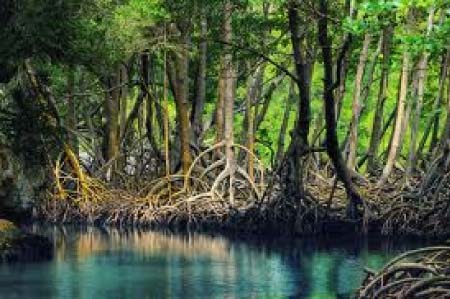 More than 40 policy makers, researchers and practitioners have taken part in a four-day workshop in Ghana on the theme: West Africa Mangroves – A key to climate change adaptation and mitigation, sponsored by the United States Agency for International Development, USAID.

“They are often marginalized in national climate change plans and frequently mismanaged, resulting in the rapid depletion of resources and benefits that they have provided for generations.

Through this workshop, USAID is highlighting the importance of the diverse mangrove benefits in the face of climate change.”

Mangroves, a variety of trees and shrubs that grow along tropical or subtropical coastlines where slow-moving water allows sediments to accumulate, have extensive root systems that protect the coast from erosion and storm damage.

Their ecosystems also support the livelihoods of millions of people. But increasingly, mangroves are recognized as highly efficient carbon sinks – places that remove carbon dioxide from the atmosphere, reducing the amount of greenhouse gas. In fact, mangroves remove about five times more carbon per unit area than any other forest ecosystem.

On average, two to seven percent of the world’s mangroves and other coastal wetland carbon sinks are lost annually.

“They also identified gaps and opportunities in mangrove research. The workshop focused on mangroves in Ghana, Liberia, Guinea, Sierra Leone and Cote d’Ivoire, and supports the forest convergence plan of the Economic Community of West African States, ECOWAS.

This activity is funded through the USAID West Africa regional office, whose goal is to promote social and economic well-being advanced by West Africans.