The Organising Committee of the Gambia Football Association, at its meeting held on Tuesday decided to give Interior FC maximum 3 points, with 2 goals following the abandonment of their game against Wallidan on May 14, as a result of colour clash.

According to the committee, the decision is in line with the rule of the game between and in compliance with the provision of the circular that was sent and confirmed to be received, by all first division clubs.

"Reference is invited to our circular, dated April 15th 2010 and addressed to all league clubs, aimed at addressing clash of colour during the league and other competitions, sanctioned by the Gambia Football Association, a copy of which was received and signed by one of the high-profile club officials of Wallidan, and a copy attached for your retention," a letter from the GFA signed by Abdou Salaam Jammeh Assistant Secretary-General stated.

The dictate of the April 15th circular has clearly shown out that Wallidan, as the away team is required to wear a different colour which they failed to address, and consequently the match has to be abandoned by the central referee. 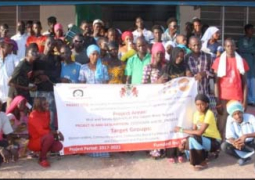