The Gambia-Senegal border has been reopened, according to the announcement made by Alhagie Mansour Ndire, spokesman of the Senegalese transport union, through the media.

We want to thank the Almighty Allah (SWT) for making it possible for us to achieve a positive result and to open a new chapter in our relations.

The three-month closure of the border seriously affected businesses and caused huge loss of revenue to both countries, as well as neighbouring countries, who were caught in the web of the border impasse between the two nations, hence suffered a lot.

This is a lesson for the two countries; that they should not to allow such an unfortunate situation to continue to repeat itself.

Before any decision, the governments should inform each other, discuss and agree. We are bound to have problems, quarrel among ourselves as human beings. We should always have the maturity to solve problems and open a new page.

Gambia and Senegal are bound to live together, we are blood-related and we should not entertain bad blood between us.

It is advisable that the authorities of the two countries meet at least twice a year, once every six months.

Senegal and The Gambia are to reinforce their bilateral ties and cooperation.

The Senegalo-Gambia permanent secretariat should play a pivotal role by promoting excellent relations between the two countries.

All proposals for our mutual growth and development should be channeled through the secretariat, including complaints, and other worthwhile suggestions.

We should continue to main the free movement of people and goods, as recommended by ECOWAS.

We should introduce more ferries and rail transportation between Dakar and Banjul.

Good cooperation in the field of security, the judiciary and sports should be promoted.

Once again we say bravo to both authorities for their efforts and successful strides to bringing the border impasse between our two countries into an end.

Peace cannot be kept by force; it can only be achieved by understanding. 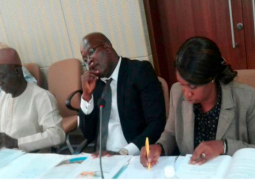