They were charged with twelve counts of criminal offences including conspiracy to murder, murder, assault causing actual bodily harm, conspiracy to commit misdemeanor, forgery and making documents without authority.

When the matter came up, one of the defence counsel, C.E. Mene, informed the court that he has not been served with the information regarding the new charge preferred against his client and the other accused persons.

The state prosecution team, led by lawyer M.B. Abubacarr, told the court that the accused persons were served with the bill of indictment inside the courtroom a few minutes before the presiding judge came into the courtroom.

Lawyer M.B. Richards said the accused persons may have been served barely five minutes before the judge came into the courtroom.

He craved the court’s indulgence to impress upon the state to furnish the defence with the necessary information, so as to enable the defence prepare for their case.

Lawyer C.E. Mene recalled that the court in its ruling at the last court sitting implored the state to file the proper information.

He expressed appreciation to the court for taking a positive position to ensure a fair hearing, but blamed the state in their approach to serve the accused persons in the dock, noting that the move could delay the expeditious trial of the matter.

The presiding judge, Kumba Sillah-Camara, adjourned the matter until 3 April 2017, for plea-taking. 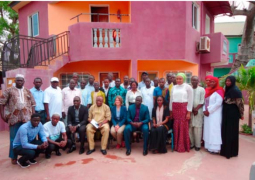