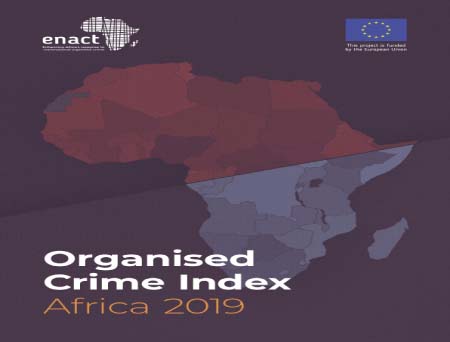 Although, the issue of organised-crime is less prominent in The Gambia than in other nations in Africa, it nevertheless presents a serious issue for the country and its citizens.

Criminal networks that benefit from the aid of corrupt public officers predominantly run organised crime in The Gambia. The cocaine market is reported to have a severe impact on nearly all parts of society, as Gambia is a significant trans-shipment point for the trafficking of the drug, with state officials working in collusion with organised-crime groups.

The Gambia is also considered a source and destination country for forced labour and sex trafficking, with the networks that control the latter being international in their operations.

In terms of resilience, Gambia is ranked 17th in Africa, performing notably better than the continental average.

The positive score reflects its significant progress in anti-corruption initiatives in the post-Jammeh era, aided to a significant degree by the strength of non-state actors operating in the country, and its modest ability to control its borders. However, there is significant scope for improvement with regard to measures of organised crime prevention and support for victims and witnesses, without which, organised criminal activity will continue to persist.

The most pervasive criminal markets in Gambia are for human trafficking and flora crimes, which both score 7.

The country is both a source and destination market for trafficked persons. The most pervasive forms of human trafficking in the country are forced labour and sexual exploitation, while victimisation of young boys in the latter is increasing. It has been observed that sex trafficking networks use European and Gambian travel agencies to promote child-sex tourism. Sex traffickers increasingly host child-sex tourists in private residences outside the commercial tourist areas of the capital, Banjul, making the crime harder to detect.

In Gambia, flora crimes, in particular timber traffickingwas rampant under President Jammeh. However, the new government has shown considerable political will to reduce trafficking in illicit timber and to cooperate with neighboring Senegal in the fight against this activity. Nevertheless, cross-border illegal logging and smuggling persists. Most of the rosewood exported from the country appears to be of Senegalese origin, with trafficking routes extending along Gambia’s southern borders with Senegal’s Casamance province, and supply chains running from Guinea-Bissau, through Casamance, and Banjul, where the timber is exported to Asian end markets.

The drugs markets in Gambia are established, given the country’s role as a transit state in the transnational trade. The country is a significant trans-shipment point for cocaine being trafficked from South America to European markets.

It is one of the main countries for cocaine trafficking in Africa, and huge volumes of cocaine shipped by sea and air have been seized. State corruption is a significant contributor to the trafficking environment, as drug-trafficking groups act with impunity in the country, able to use Gambia as a regional staging point for receipt and onward shipping of large volumes of cocaine. There is also a growing domestic market for cocaine consumption, led in part by the increase in tourism development, and the consequential influx of European tourists.

According to the country’s Interior Minister, cannabis is the most problematic drug in Gambia and is responsible for most of the drug-related crimes committed in the country. The government currently opposes the decriminalisation of cannabis use and confiscates over a metric ton of marijuana every year. Young people are the demographic group that most consume cannabis.

Gambia also acts as a transit point for heroin enroute to Europe. The volume of heroin trans-shipping via Gambia is increasing and the government has indicated that it perceives this growing market as a national threat.

State-embedded actors are the most influential individuals in the organised-criminal activity taking place in Gambia. Corruption is rife in the country, particularly within the law-enforcement bodies. It is state complicity in the Gambia that allows drug trafficking to persist, as the groups operating in the market act with impunity.

Criminal networks are similarly influential, driving the major criminal markets in the Gambia, including the drugs markets, the illicit flora market and the human trafficking market.

Ranking 17th in Africa, Gambia’s resilience to organised crime is greater than the majority of countries on the continent. The government does not appear to have made countering organised crime a priority, although it has made concerted efforts to reduce corruption within the state apparatus. Nevertheless, much more needs to be done to address corruption in order to put an end to state involvement in criminal activity. The country does, however, have numerous laws pertaining to organised crime and has established a financial intelligence unit.

As for the judicial and detention system in Gambia, they are fairly competent compared to those of other African nations. The country has a functional judiciary, with a history of sourcing judges from other African countries to enhance its effectiveness. There have also been ongoing efforts under President Barrow to sanitise the country’s law-enforcement agencies and curtail the corruption that undermines their effectiveness. Given the small geographical size of the country, Gambia’s borders are easier to control than those of many other African states.

The border is managed by the Immigration Border Patrol Unit with the support of the sister services. The country is also working with the IOM, the UN migrations unit, to build a national border-control system. Under the present administration, Gambia’s relationship with neighbouring countries, Senegal in particular, has improved.

Press freedom in Gambia is at a critical juncture, following the change in power from former president Yahya Jammeh to Barrow. The Media Legal Defence Initiative recently achieved successes at the ECOWAS Court, challenging the laws used to silence and intimidate journalists in the Gambia. The judgment recognised that the criminal laws on libel, sedition and false news disproportionately interfere with the rights of Gambian journalists, and the court directed that the Gambia should ‘immediately repeal or amend’ these laws in line with its obligations under international law.

Overall, until 2016, Jammeh emasculated civil society organizations in the country, including the media, but there is greater freedom under the current government. However, there are still major deficiencies in victim and witness support in Gambia. There is no witness protection programme in the country, and due to a lack of policy appetite from the government, very little support is offered to victims of organised crime, in particular to victims of human trafficking.