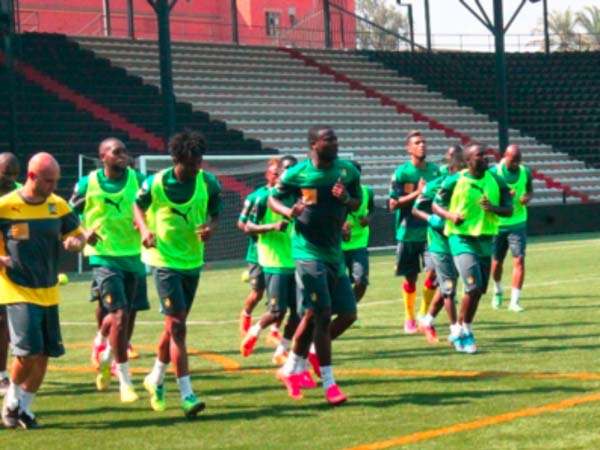 The first delegation of players called for the match on 6 September is in the Senegalese capital.

In this quota, there are three goalkeepers (Ndy Assembe, FabriceOndoa and Andre Ako); the defenders include Nicola Nkoulou, JoëlMatip, Henri Bedimo, Sebastien Bassong, the Edgar Salli, Benjamin Moukandjo, Raoul Cedric Loe Choupo Moting, and the attackers include Jacques Zoua. As soon as they arrived in Senegal, the players went to work.

Fitness sequence in the hotel’s gym supervised by staff members is already in full gear. Other players are expected tonight and tomorrow to make up the complete attendance in the selection.

The Indomitable Lions have gradually taken to their neighborhoods in Dakar, Senegal, for preparation of the September 6 match against The Gambia.

The first members of the Cameroonian delegation arrived in Senegal Sunday afternoon from Cameroon. Of the 23 players invited, Clinton Njie would not be making it for the crucial encounter.

The Tottenham player, who suffers a minor injury, will be replaced by Edgar SALLI, whose name was previously on the waiting list.

The Indomitable Lions are first in their group thanks to the victory (1-0) against Mauritania during the first game. A victory next Sunday in Banjul would enable Cameroon to consolidate their leadership position.

Cameroon would also make up their team without Aurelien Chedjou. The Galatasaray defender injured his knee last Saturday during a match between his club and Konyaspor.