One Morro Dumbuya was Thursday 26th January 2009 arraigned before the Brikama Magistrates' Court, presided over by Magistrate Pa Harry Jammeh, charged with obtaining credit by false pretence contrary to section 291 of the criminal code cap10 Vol. III laws of The Gambia.

According to the particulars of the offence, on or about the year 2007 and 2009 in , Kombo North, the accused Morro Dumbuya with intent to defraud obtained the sum of D15, 000 from one Sulayman Wadda on the pretext that he would pay back the money when his white girlfriend returned from the .

When the charge sheet was read and interpreted to him in the Language he understands, he pleaded guilty.

According to the police prosecutor CPL 1781 Kinteh, it happen in the month of September 2008 at . He said the accused Morro Dumbuya had been confronting the complainant Sulayman Wadda on several occasions to credit him money up to D15, 000 with the pretext to pay the money when his white girlfriend returned from the .

Following his admission to the charge, he was convicted and sentenced to a mandatory jail term of one year. He was also ordered to compensate the complainant the sum of D15, 000 in default to serve another 6 months imprisonment. 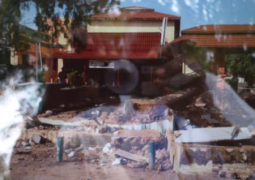