Ismaila Sambou, the former Minister of Local Government and Lands, recently testified as a defence witness in the trial involving one Momodou Kurubally, accused of wilful damage to property before Magistrate Isatou Janneh of the Brikama Magistrates’ Court.

He told the court that the said land did not belong to any of the two families, neither Bojang Kunda nor Bah Kunda.

He said the land belongs to the state and, during the construction of the road, the said land was demolished by the road contractors, adding that the road passed between the two compounds, Bojang Kunda and Bah kunda.

They again sent Binta Jallow to go and report the matter to the Alkalo, but the alkalo did not entertain Binta Jallow on the matter, Sambou said, adding that Binta proceeded to the police station at Brikama.

He said while Binta was at the police station until in the evening, he told the accused person for them to go and bring her home.

On their way home, they met with the complainant and two PIU officers, together with the Alkalo for the said land, where the incident happened.

He confronted them there and they started quarreling, but he was not attentive when the accused person was felling down the fence.

Also testifying was Binta Jallow, who told the court that she knew the accused person, adding the land in dispute between Bah Kunda and Bojang kunda belongs to her.

She said she knows nothing about the case in which the accused person was charged.

Under cross-examination by the police prosecutor, Chief Inspector Camara, Binta Jallow maintained that the land in dispute between Bah Kunda and Bojang Kunda belongs to her.

Trends In Tuberculosis Control In The Gambia 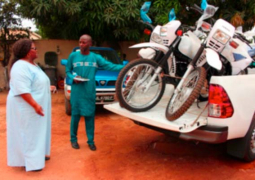