Kanimang Camara, Director of NACO, who doubles as the national facilitator for forest and farm facility of the Gambia, lamented on the importance attached to the National Farmers Conference.

He said it was also based on the significance attached to the event, through which the forest farm facility supported 28 community forestry committees who were invited to participate, to integrate them into the National Farmers Platform of The Gambia.

According to Mr Camara, the Forest Farm Facility (FFF) had supported 28 community forestry committees across the country with the aim of becoming self-reliant and sufficient in farm produce.

He said the FFF is a process in The Gambia supporting three main pillars, thus to ensure that forest and farm producer groups have access to market for their products and be engaged in policy dialogue as well as to ensure there is adequate coordination among agriculture and natural resource institutions in The Gambia alongside farmers so the objective of the ANR policy could be achieved in the next few years to come.

The conference was important to them because the purpose of the convergence was to discuss forest landscape, which led to the forum by the National Farmers Platform, he explained.

He said the conference was also held to see how best communities and former organizations could be incorporated to the National Farmers Platform.

Camara further called on the need for integrated approach towards managing their common resources in the interest of both farmers and foresters.

He said the FFF is a follow-up on the preceding national forestry programme facility currently being piloted in six countries in other parts of the world and four countries in Africa including The Gambia.

He said their expectation on the national farmer conference was to review the declaration made by farmers in 2012 in Janjanbureh as there was a declaration of up to 26 points.

He said the forum was an opportunity for the farmers to look into the role played by farmers themselves in ensuring that those declarations were met and assessed so the objectives could be achieved.

He added that forest farm facilities were also engaged in food processing in The Gambia, which was another step. 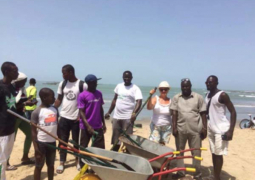