FAO hands over D4M worth of CBPP equipment to DLS 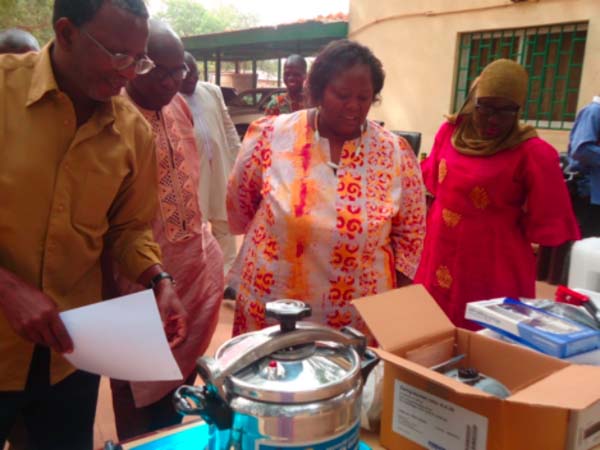 The Food and Agriculture Organization (FAO) Tuesday handed over laboratory and field equipment to the Department of Livestock Services at a ceremony held at Abuko.

They were given to effectively support the cold chain, gas burners and cylinders, sterilization cookers, and other laboratory equipment and materials.

Speaking at the handing-over ceremony, the FAO country representative, Dr Perpetua M. Katepa-Kalala, expressed delight to witness the handing-over of equipment and materials to the department of Livestock Services.

According to her, the two projects are providing support: one is FAO’s technical cooperation project that provides assistance to control the outbreak of Contagious Bovine Pleuro-pneumonia (CBPP), and the second is the FAO project Emergency Agriculture Support to Vulnerable Households funded by the Japanese government.

Livestock constituted an important source of food, as well as a store of assets for many households in The Gambia, she continued, adding that livestock is important to the country’s economic and social fabric.

According to her, CBPP is a major deadly disease considered among the biggest threat to cattle production in sub-sahran Africa.

In some circumstances, mortalities could easily surpass 50 per cent if effective control measures are not urgently taken, she said.

When CBPP re-emerged in The Gambia in August 2012 after an absence of 42 years, it was critical to begin to stamp it out as quickly as possible, she continued.

FAO is pleased to have been a faithful partner to the Gambia government in this important effort, she went on.

Since the government declared a National Animal Health Emergency in the country and began mobilising all available emergency funds for immediate action, FAO provided support through an emergency TCP Project amounting to US$469,000, equivalent to D19,229,000.

The project was part of the FAO technical cooperation programme (TCP), she added.

The TCP is an important way in which FAO contributes to the achievement of the UN Millennium Development Goals, particularly the goal of eradicating extreme poverty and hunger, according to the FAO official.

The project was designed to conduct a nationwide vaccination campaign to curb the spread of the disease, enhance the technical knowledge and capacity of the staff on improved techniques for CBPP diagnosis, disease surveillance, as well as improve the capacities of national laboratories for disease diagnosis.

The support was also extended to addressing issues of funding for basic field and laboratory activities, she further stated.

It was expected that the project would help to contain the CBPP outbreak, and minimise the rapid spread of the disease to all parts of the country, she said.

FAO stands ready at all times to support the food security needs of the Gambian people in consonance with their mandate and comparative advantage in this important livelihood sector, she added.

Dr Katepa-Kalala expressed gratitude to the Ministry of Agriculture and the Gambia government for the formidable partnership they have forged in their endeavour to eradicating CBPP in The Gambia and the sub-region.

“We at FAO will continue to work in tandem with the Government of The Gambia in the implementation of the projects and programmes that are in consonance with the country programme framework CPF that embodies the priority focus areas for FAO work as agreed with the government,” she stated.

Speaking on behalf of the Ministry of Agriculture, Isatou Yabo expressed gratitude to FAO for the support through the TCP.

She said they have funded the conduct of mass vaccination campaigns for at least 5 years and beyond, until the causative agents was serologically proven to be absent from cattle population.

Dr Duto Fofana, overseeing officer of the DLS, said the importance and relevance of the materials in the control and eradication of contagious Bovine Pleuro-pneumonia (CBPP) could not be overstated.

He expressed appreciation and gratitude to the FAO for providing not only materials and equipment, but also financial resources to conduct the past, present and future vaccination campaigns.

Fofana also thanked the Gambia Livestock Marketing Agency (GLMA), PROGEBE and the Ministry of Agriculture for their enormous support in fighting and eliminating the deadly cattle disease from the country.

Dr Demba Jallow, Director General of GLMA, also thanked FAO and the Gambia government for the effort and collaboration to end the deadly disease.