Traditionally, maps have been an important source of environmental information. Maps are either topographic (showing physical features and their location) or thematic (depicting specific application such as soils and based on a topographic base). In The Gambia, the Department of Lands and Surveys is the agency mandated to produce and maintain topographic maps.

In addition to this, different agencies do produce thematic maps in their respective areas of application. This is because such institutions are mandated to collect the data depicted in such maps. The Soil and Water Management Unit of The State Department for Agriculture, for instance, produces soil maps as the institution mandated to collect and manage soil data.

These are non-graphics data produced to highlight a particular subject or phenomena. Almost all institutions in The Gambia produce some form ofdocument or report for different thematic analyses for planning and management.

A large collection of aerial photographs exists on the Gambia dating back to 1945. In fact since this date a new photography of national coverage has been produced at least once every decade. This forms a good source of spatial data on which change analyses over time can be made. In particular, the photographs, flown in late 1994, serve as a good basis for national mapping exercises or the revision of existing maps. A most recent completed project funded by the Japanese International Corporation Agency (JICA) in 2000, under the focal point of the Department of State for Lands and Survey has produced aerial photographs of the whole country.

Satellite imagery is not currently widely used in the Gambia for environmental management and monitoring of natural resources. This is probably due to the high cost of satellite images, the relevant equipment and the technology it employs. For this reason, the collection of satellite data in the Gambia is currently very small. However, it is understood that the Department of Water resources does have the capacity to receive METEOSAT data.

The type of environmental data collected and managed in the Gambia is very wide. These can however be broadly categorized into the following themes and sources:

Energy Use of firewood Reports GREC

While some of these data are freely available, others are provided at a cost. These include maps and aerial photographs.

Lack of appropriate and adequate equipment to measure loadings in the environment and preparation of ecological maps.

Lack of skilled personnel, in particular, at the GIS Unit of CSD and NEA; financial and technical resources (limited computerization), to collect, interpret and report environmental data.

Lack of funds to conduct surveys at regular intervals for updates.

Low level of standardized and compatibility of data sets, and systems interoperability.

Lack of coordination in data collection, especially between line departments and specialized institutions.

NEA plans to mobilize funds in order to prepare, publish and disseminate the second State of The Environment Report of The Gambia.

The CSD plans to mobilize funds to build the capacity of its Environment Statistics Unit. The unit will use the framework that would be prepared by this workshop. Some modifications will be made in the framework to incorporate national and sub-regional concerns and data needs.

Develop and implement a Memorandum of Understanding (MOU) between the CSD and the NEA in order to link the environment unit to the NEA’s inter-sectoral network coordination.

Develop and implement strategies to put the CSD Environment Statistics Unit and NEA EIS Programme on a sound sustainable footing.

The Environment Statistics Unit of CSD and NEA EIS Programme should use existing databases and surveys to obtain further relevant and temporal information on the environment. 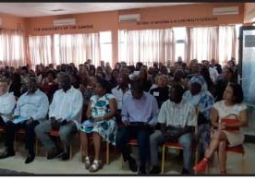