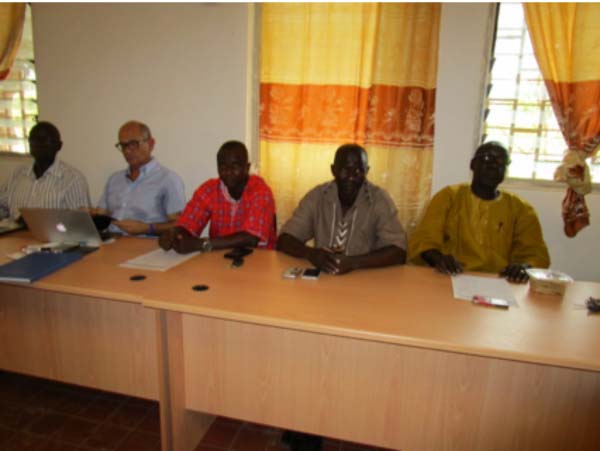 EMPRETEC Family Forum West Coast Region chapter over the weekend convened a daylong general meeting for their members in 2016, at the regional education directorate office in Brikama.

The forum was also attended by officials of GPPA, EU technical assistance expert, and representative of GIEPA.

Lalo Danso, Director of Public Procurement Policy at GPPA, said the purpose of the general meeting was to join the EMPRETEC Family Forum chapter in West Coast Region in their general meeting for 2016.

He said the meeting was meant to interact regarding the role of GPPA, and how important they are to GPPA in terms of doing business with government.

“I feel this interaction is very important because it is an opportunity for them to be aware of the establishment of the authority, the GPPA.”

The authority is here to help them and guide them in the process of registration, as it is very important for them to register with the authority, he added.

According to Mr Danso, not only registering with the authority, but by doing so would help the government to earn tax revenue.

He said it was also part of their plans to discuss with GIEPA to visit other EMPRETEC family chapters in other regions of the country, and discussed with them regarding the importance of registering with the GPPA.

They are also planning to have a whole day’s training activity on the functions, operations and Act governing the GPPA and on the importance of having medium and small enterprises in the country, and how they link with other stakeholders, especially the government.

He also spoke about the importance attached to GIEPA, and said is out not only for international investors, but to help Gambian entrepreneurs, especially small and medium enterprises.

Regarding the role of the EU in the project, Mr Danso said EU is to give technical assistance on the issues of public procurement.

He said since EU started working with GPPA they have seen a lot of improvement regarding procurement not only procurement, but the overall reform.

He said EU is working towards helping to have a procurement manual so that they could use that manual at any time that they want to conduct procurement, which would guide them in the process.

Mr Danso urged all Gambians to adhere to the principles of public procurement when doing business with government, and to make sure they do it in accordance with the procurement Act.

He said in The Gambia there is much business to do with the government through tenders, and sometimes this was not easy because there are rules to respect and mechanisms to put in place.

He advised the small enterprises to raise their voice regarding difficulties encountered when trying to tender for government contracts.

Mr Olivier also dilated on the legal framework in The Gambia, adding that there is a good GPPA Act in the country and the Act was gazetted recently.

He said since it is a new law, their message is to sensitise the private sector that there is a law and everyone has to know the law if they want to get into the system of public procurement.

Alieu Touray, president of Empretec Family Forum West Coast Region chapter, said their purpose is to represent those that want to engage into small business.

He said the main purpose of the programme is to enhance business, and improve the living standard of Gambians.

He said the meeting was to talk about rules and regulations to be able to support business, and their chapter was geared towards trying to link small business enterprises to others.

He said the EU technical assistance expert was part of the forum to listen to their concerns, and see how best to redress them.

Also speaking was Swaibou Cham, research and survey manager at GIEPA, who doubles as a business development services manager for EMPRETEC.

Cham said GIEPA is all about promoting investment and trade in the country.

He cited the four core functions of GIEPA, and that one of them is advocacy and dialogue.