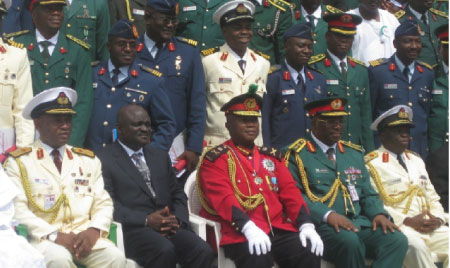 A one-day meeting of the ECOWAS Committee of Chiefs of Defence Staff (CCDS) will be convened today 14th May 2012 in Abuja, Nigeria, to consider modalities for the deployment of troops to Guinea Bissau and Mali, as part of the region’s response to the increased security challenges in the region.

This is in continuation of preparations for the deployment of an ECOWAS mission to both countries as mandated by regional heads of state and government at their summit held in Dakar, Senegal, on 3rd May 2012.

They will be updated on the logistic preparations to support the deployments, preparations for the deployment in Guinea Bissau, as well as on the situation in Mali following the overthrow of the government of democratically-elected President Amadou Toumani Toure in the coup of 22nd March 2012.

The meeting will also be briefed on the current status of the separatist rebellion in the north of Mali.

They will specifically consider issues relating to force generation for ECOWAS Mission to Mali and the units proposed for the reconstituted force of 3,000 troops.

In addition, the force commander of the ECOWAS Mission to Guinea Bissau

(ECOMIB) will make various presentations to the committee on the force.

The meeting coincides with the military equipment exhibition organized by the Nigeria armed forces, and at the instance of their Nigerian counterpart, the chiefs of defence staff will participate in the air and equipment show, which will take place in Kaduna on Tuesday 15th May 2012.

Previous:
22 US Peace Corps volunteers sworn in
Next:
Man convicted for drug