Muhammed Sedibeh and Alieu Baldeh were recently arraigned before Prinicipal Magistrate Kayode of the Kanifing Magistrates' Court, charged with stealing.

The charge sheet revealed that, on 15th January 2010, at Serrekunda, the duo jointly stole half bag of tomatoes and Irish potatoes, valued at D375, being the property of one Menata Gassama.

The case was subsequently adjourned to 15th February 2010. 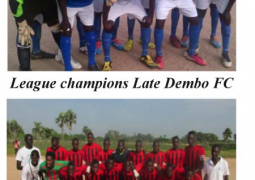