The Basse High Court presided over by Justice Simon A. Abi on Friday 28 July 2017, adjourned the criminal case involving Abdoulie Bohum to the October sitting for judgment.

The prosecution alleged that the accused, Abdoulie Bohum, on 29 April 2014, at Misera-Ba Mariama Village in the Upper River Region murdered one Aja Mariama Nyan, aged 101 years by stabbing her with a knife.

The prosecution called four witnesses to prove its case against the accused and tendered exhibits, and the accused called two witnesses in his defence.

According to the first prosecution witness, Jainaba Bohum, (the mother of the accused), on the day of the alleged incident, around 14:00 hours, whilst she was in the veranda having lunch, she heard her mother (the deceased) shouting for help, saying that the accused had stabbed her in her stomach and she was dying.

She testified that she saw the knife sticking out of the stomach of the deceased, which she removed.

The second prosecution witness, Fatoumatta Bohum, also testified that on the said date around 14:00 hours, whilst having lunch, the deceased came out of her room, saying that the accused had stabbed her with a knife.

The third prosecution witness, Amie Baldeh, also testified that on 29 April 2014, around the 14:00 hours whilst having lunch, the deceased came out of her room shouting for help, saying the accused had stabbed her with a knife.

She further testified that she saw the mother of the accused approach the deceased to help remove the knife from her stomach.

The accused, in his defence, denied stabbing his grandmother and that on the day of the alleged incident he was sitting with some of his colleagues at the compound gate when he heard noise inside the compound and said he knew nothing of the incident.

Meanwhile, the matter was adjourned to October sitting in Basse for adoption of briefs. 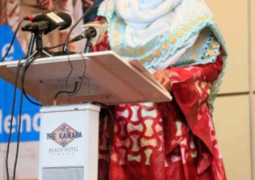