Acting Principal Magistrate A. Kemo Ceesay of the Brikama Magistrates' Court on 21 October 2010 convicted and sentenced one Lamin Ceesay to a mandatory jail term of six months for "rash and negligent act causing death".

The convict was also ordered to pay a compensation of D2,000 to the victim’s family as well as a fine of D1,000 to the state in default to serve another one month in prison.

The charge sheet as presented by the police prosecutor revealed that the convicted person, Lamin Ceesay, on 2 July 2010 drove a motor vehicle with registration Number KM 4558B along the Busumbala village highway in a "rash and negligent" manner, thereby causing the death of Bakary Jatta, a pedestrian, by knocking him down.

Ceesay pleaded guilty to the charge and begged the court for forgiveness, saying he had a pregnant wife.

In passing sentence, the presiding magistrate stated that the court had heard the plea of mitigation of the convict, who had also shown remorse to what had happened.

However, looking at the nature of the offence committed, the court said it wanted to send a message of warning to others by jailing the convict, who was accordingly convicted and sentenced. 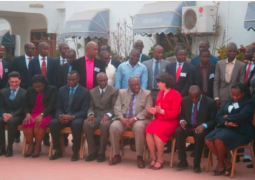