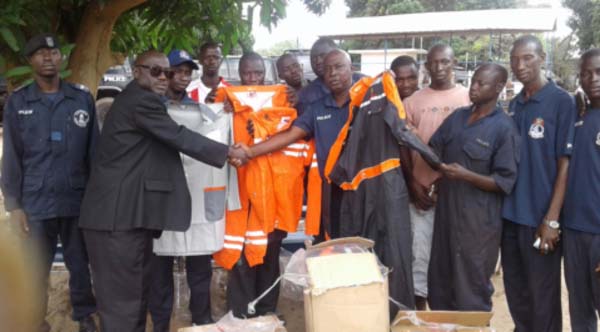 PETROGAS, a company that deals in gas and petroleum products, took over from Galp in February 2017 and is currently running 11 filling stations across The Gambia.  The largesse was in response to an appeal for help that the leadership of the garage made to the company.

Presenting the items, the general manager of PETROGAS Lang K. Konteh described the gesture as a fulfillment of the company’s corporate social responsibility.

He said the police garage facilitates the mobility and the smooth running of the police force by ensuring that their vehicles are road worthy.

Mr Konteh lauded the police for the crucial role they play in maintaining peace and security without which, he said, no business would prosper and assured them of his continued support.

He said PETROGAS currently has a total of 70 employees and plans to open new filling stations at Basse, Bansang, Farafenni, Essau and Kaur to create more employment opportunities.

Receiving the items, acting Commissioner at the police garage Essa Jagne said the donated items are aptly the needs of the workshop.

On behalf of the Minister of the Interior and the IGP, he commended the company for the gesture saying the garage is key to their operations.