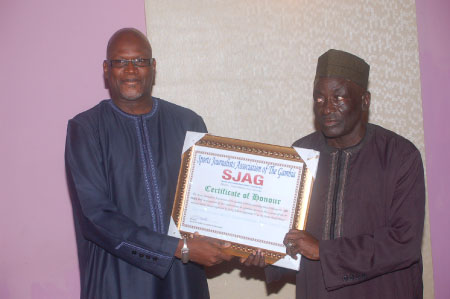 Alh Capi Joof better known as Capi was among the eight recipients of the Sports Journalists Association of The Gambia award meant to recognise his contribution to Gambian sports during the 4th National Sports Award held last Saturday at the SunSwing Hotel in Kololi.

Alhagie Dodou Joof better known as Capi is currently the President of the Gambia Athletics Association. He was theSecretary- General of the Association and was voted the most outstanding sports personality in an annual Sports Banquet and Awards Ceremony organised by the Gambia National Olympic Committee in 2007.

Born in Banjul, The Gambia’s Capi Joof was a household name and truly a national hero, who was a force to reckon with at the track, indeed an outstanding sprinter.

Dodou Joof was among the finalists in the 200m in the Commonwealth Games held in Edinburgh, Scotland, and a medalist in the regional championships in Dakar, called Semaine Nationale de La Jeunesse in Senegal, in 1970.

Dodou then retired from active competitions, and opted to become an athletics coach and administrators. Subsequently, he was awarded a coaching scholarship in Loughborough, in England.

He also holds a diploma in track and field events from Loughborough, UK and D.L.V in Germany and attended several courses and seminars in sports management.

Capi was awarded a gold medal by Striders International of USA and young Angles of South Africa in 1988.

In 1989, he received a certificate from the secondary and primary schools federation in recognition of his outstanding contribution to the development of school sport.

In 1995, he was appointed I.T.O. for the All African Games in Harare, Zimbabwe, and was also the Vice-President of the West African Cycling Federation in Burkina Faso.

Dodou Joof in 2005 in Helsinki, Finland, was awarded the International Association of Athletics Federation (IAAF) veteran pin in recognition of his long and meritorious service to world athletics.

In April 2007, in Dakar, Cappi was re-elected unopposed as the Treasurer of the Confederation of African Athletics and a member of Jury of Appeal.

In Musa Suso Case, Defence Urges Magistrate to Recuse Himself