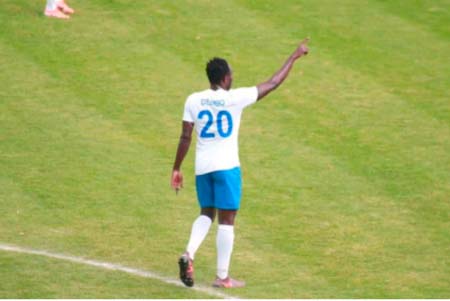 Gambian midfielder, Dembo Darboe has scored his first goal for his North Macedonian club, Shkupi during their 3-1 home win over Akademija Pandev in their week-sixteen fixtures of the North Macedonian First Division League played at the Stadion Cair on Wednesday.

The 21-year-old scored his first goal for the club after 71 minute to give his side the lead.

The Brikama-born player Dembo Darboe signed for the Macedonian top flight club in June 2019 from Senegalese side Ndiambour together with Pa Omar Jobe as they both signed two-year contract.

Darboe opened his account in the Macedonian league after scoring 12 league goals in two seasons for the Senegalese side Ndiambour.

This victory has sent Dembo and his team Shkupi to 5th position in the league after collecting 22 points, while Akademija Pandev in second in the table with 27 points after sixteen games