Saikou Ceesay, an ex-soldier from Babylon village, said he knew the accused persons, adding that the 1st accused was his friend since 1989.

Ceesay, who mentioned that he served the Gambia Armed Forces for five years, said it was not true the accused persons resisted arrest.

He said that on the day in question, he was with the 1st accused who is also the Alkalo of Babylon, in his compound when the police came with their vehicle.

Ceesay added that the people they could identify were Lamin Cham and Baboucarr Jammeh along with some PIU officers.

Baboucarr Jammeh called and asked him if Lamin was around and he told him Lamin was in his house, he explained, saying he then called Lamin to come and answer to them.

He said Lamin Cham told the 1st accused he was sent by Commissioner Wilson to come for him.

The 1st accused told them he was surprise because Commissioner Wilson had his number but he did not call him, he added.

He said Lamin Cham told him even though Wilson had his number he requested to see him at the station, adding that the 1st accused then told them to let him change his clothes, to which they agreed.

He said when the 1st accused entered his house to dress up, police commissioner Wilson arrived and asked him to tell the accused to come out immediately.

When the accused came out, he said, Wilson held his hand and moved away from the other officers and he also joined them.

He said that during the push and pull, the 1st accused told them to allow him to enter the house because he was his younger brother.

He said the police commissioner, Wilson, then asked the 1st accused to drive his own vehicle to the station.

He said Wilson boarded the 1st accused’s vehicle and seated on the front seat of the vehicle and he also joined them at the back seat.

He said when he got to the station, Baboucarr Jammeh and Lamin Cham entered their various offices while the PIU officers stood at the entrance of the station.

He said when they got to the office, Wilson told the 1st accused that he knew that Babylon belonged to him and he knew there were so many injustices, trespasses and harassments by the police, but if he wanted to be free from all that, he would do something.

The 1st accused asked him about what he should do and Wilson told him he should give him money to spend, he added.

The 1st accused then gave Wilson D25,000 and Wilson asked them to go home.

He said Wilson and the police did not arrest Lamin and he did not resist arrest but was invited by Wilson.

He said the accused person had been suffering from harassments from the police and marks are all over his body.

He said that since 2006 to date they had been torturing and arresting him anytime of the day. 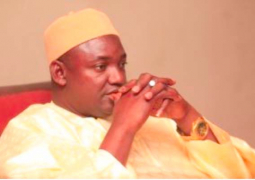 Eight in Court for illegal possession of firearms