In his address, defence counsel, Kebba Sanyang, submitted that the accused persons were charged with the offences of conspiracy, common assault and assault causing actual bodily harm.

He said the prosecution called four witnesses, adding that the evidence of the second prosecution witness (PW2) was that of an investigating police officer, who was not a direct witness to the case.

Counsel further submitted that all what PW2 narrated before the court was the information received by him during the investigation.

He added that under cross-examination, PW2 was asked whether he saw any of the accused persons wearing ‘kankurang’ materials and he answered in the negative.

“I submit that it was PW2 who brought the ‘kankurang’ gears and the cutlass to the court,” he said, adding that none of the accused persons was found with those items.

Counsel submitted that the evidence of PW2 was highly circumstantial and it was trite law that it was the duty of the prosecution to prove their case beyond any reasonable doubt.

He said another doubt in the case related to the evidence of PW1, PW3 and PW4, submitting that PW1 and PW4 were together at the time of the alleged incident and their evidence consisted of material contradiction.

“Where there was contradiction in the evidence of the prosecution witnesses, that itself is doubtful,” counsel stated.

He urged the court to acquit and discharge the accused, as he put it, the prosecution failed to prove their case beyond any reasonable doubt.

The case was then adjourned till 27 June 2012, for judgment. 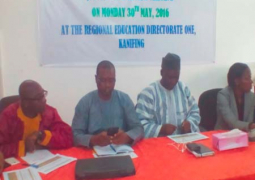