Coalition candidate given clean bill of health for Dec poll 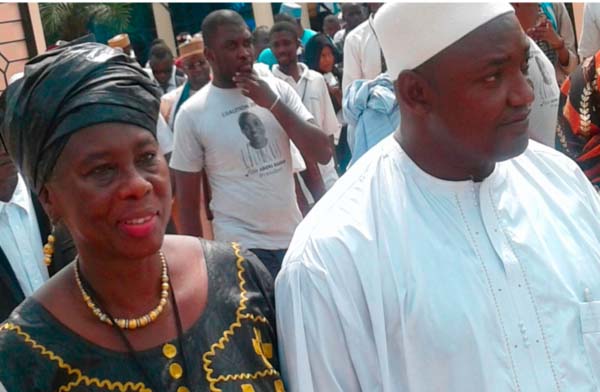 The Independent Electoral Commission (IEC) yesterday received and endorsed the candidature of the coalition parties headed by standard bearer Adama Barrow, for the December 1 presidential election.

IEC Chairman Alieu Momar Njai, in his endorsement speech, told the delegates that their standard bearer was qualified to run for presidency, because he had produced all the required documents needed by the IEC.

The IEC chairman further said the elections could not be rigged, and “it is going to be free and fair”.

He stated that before voting starts, all the party agents would ensure that “the polling booth is totally empty” and ballot drums will be sealed in the presence of party agents and representatives.

He added that nobody has the right to enter the polling booth, except the one who is going to vote; so there would be transparency.

The IEC Chairman also added that election starts with the voter’s card, and that the biometric system had been put in place since 2011.

“It is a pride that the registration system was 100 per cent correct and all those who now possess voter cards are bonafide Gambians at the age of 18 or more, because IEC had invited all parties and agents to all regions and centres for them to object to anybody they feel was unqualified, either by age or nationality.”

“We make sure it is done properly, and we also appoint judges in all the regions so that any complaint that cannot be addressed on the spot should be addressed by those judges.”

He added that so far, during the last registration, there was no single case before a magistrate or judge and the voters list was 100 per cent accepted.

Also speaking, the IEC vice chairman, Malleh Sallah, appealed to stakeholders to maintain a peaceful election because, he added, at the end of the day everybody involved in the process does so in the interest and development of the country.

He said whatever people do, they should all have the code of conduct that would outline the good practice for the campaign, which should be abided by.

He said further that the IEC would always remain independent, and guarantee free and fair elections to the Gambian nation.

“We all need to show the world that our elections are world class,” he declared.

Adama Barrow, in his statement, emphasised on the independence of the IEC and that this will make everything easy for them in the field.

He also commended his colleagues for choosing him as the standard bearer, and called them his “generals”, because they have sacrificed a lot for them to come together and challenge the incumbent, come December 1.

Talking to the press shortly after his nomination, Barrow said he has no doubts about winning the election, because he has got a “very strong technical team”.

He said though they are facing numerous challenges, that has not stopped them from what they believe in and, come December 1, all their hard work and dedication would finally pay off.

“We will maintain peace and stability, and we will respect the rights of each and every Gambian,” Barrow assured all.